The New York Times carries one of those “ask a doctor” columns called “Ask Well.”  The other day it responded to the question:  “Is there such a thing as traveler’s constipation?”

Parenthetically, this reminded me of when I was in college and the Ohio State Lantern carried a similar, extremely popular feature, in which one of the doctors at the University responded to student health questions.  Since the questioners were college students, the tone of the inquiries wasn’t exactly elevated.  I remember that one of the questions fielded by the doctor came from an oddly observant student who wondered why some of his toilet deposits sank to the bottom of the bowl while others floated.  No doubt the doctors who agree to write such columns wonder, from time to time, whether this is really why they went through the hell involved in getting an M.D. 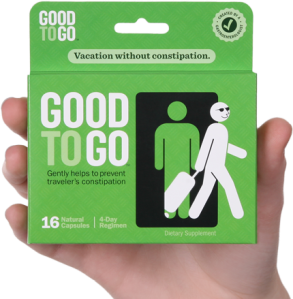 Anyway, back to the pressing issue of “traveler’s constipation” — the Times doc states that there is such a thing, and it afflicts a percentage of travelers.  In fact, several medical studies of the phenomenon have been conducted.  One of the studies, of 70 Europeans who had traveled to the U.S., was quite robust in its data acquisition.  The Times described it as follows: “In addition to the usual questionnaires, all subjects maintained diaries on their bowel habits, had stool samples evaluated for consistency according to a standardized methodology, and had their colonic transit time measured after ingesting radioactive tracers. Colonic transit time is the time required for stool to move through the large intestine.”  (You’d think that ingesting radioactive tracers that the subjects would know were moving through their guts and then maintaining diaries on bowel movements and having stool samples analyzed might interfere with normal functioning and produce false results, but apparently not.)  And there are actually products out in the market that are supposed to help deal with “traveler’s constipation.”

But although the studies reported in the Times detected some evidence of “traveler’s constipation,” which apparently is primarily noticed during the first days of travel and often correlates with jet lag, whether the condition is caused by travel isn’t exactly clear.  The studies note that travel also often involves changes in diet and exercise — sitting at an airport gate eating something purchased along the concourse isn’t exactly designed to promote “regularity” — and the Times doc also notes that a significant portion of people, from 12 to 19 percent, are generally constipated whether they are traveling are not.  That may explain why it’s not unusual to meet grumpy people in the world.

It’s also not clear whether the studies also looked at another potential cause for “traveler’s constipation” — namely, a concerted effort on the part of mind and body to avoid having to use a dubious public airport bathroom — that might contribute to the condition.  The good news, though, is that the Times doc concludes that “traveler’s constipation” is not a serious health problem.  In short, it too shall pass.