President Donald Trump has a particular, head-scratching talent for creating controversies that are both unnecessary and divisive.  The President’s recent insulting tweet about the intelligence of LeBron James is a classic example of a problematic character trait that just won’t go away. 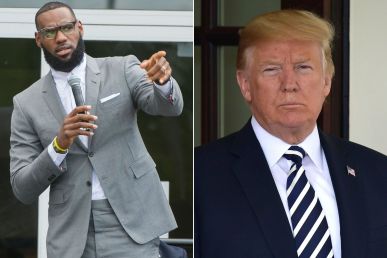 In case you missed it, CNN’s Don Lemon interviewed LeBron James about a school James established for underprivileged children in Akron, Ohio at which every student receives free tuition, food, a uniform, and a bicycle.  It’s a classic example of James’ continuing focus on his old home town and using his celebrity platform, and his own money, to help those in need.  Even Cleveland sports fans who are disappointed that James has decided to play in Los Angeles respect his commitment to his roots in northern Ohio.

So where does the President come in?  Apparently he was miffed that James, who was an outspoken supporter of Hilary Clinton during the last campaign, responded to a silly question from Lemon by saying he might have to run if there was no one else to oppose President Trump.  That evidently was too much for our thin-skinned President, who then tweeted:  “Lebron James was just interviewed by the dumbest man on television, Don Lemon. He made Lebron look smart, which isn’t easy to do. I like Mike!”

The silly question and answer provides no basis for insulting the intelligence of either LeBron James — whose public statements, whether about sports or other topics, are typically careful and thoughtful — or Don Lemon.  And the President’s ad hominem attack provoked many athletes, as well as First Lady Melania Trump, to make statements supporting James.  It’s just the latest example of how our touchy President’s inability to restrain himself produces another gratuitous, divisive controversy.

I’m not sure President Trump really takes advice from anyone, but you’d think someone could convince him to put down the Twitter feed for once and just let the economy do the talking.