Columbus has a long and storied history as a test market for new products.  Soft drinks, fast-food offerings, and other consumer goods are often introduced here because central Ohio is a fair microcosm of the country as a whole, with a spread of income levels, races, ethnicities, and urban, suburban, and rural settings in a small geographic area. 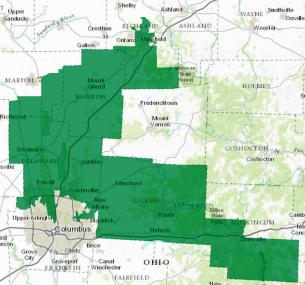 Today, the Columbus area will serve as a test market of a different sort.  The product being evaluated is politics.  There’s a special election to fill the congressional seat in the 12th District, which is one of three districts in the central Ohio area, and all indications are that the race is neck and neck.  The national political gurus are focused on the race as a potential advance indicator of the country’s mood when Election Day rolls around in November.

Republicans are worried because the 12th District has long been a GOP seat, but when long-time Congressman Pat Tiberi retired in January the seat went up for grabs.  The Democrats nominated Danny O’Connor, who has campaigned as a centrist and raised a lot of money.  In a bid to appeal to a middle of the road electorate, O’Connor originally vowed not to support Nancy Pelosi for Speaker of the House if he was elected, although he recently retreated from that pledge.  The Republican candidate is Troy Balderson, a state Senator who has been endorsed by both Ohio Governor John Kasich, who once represented the 12th District, and President Donald Trump, who has been here recently to campaign for Balderson.  The most recent polls show the race is effectively tied.

Which way will the test market go?  There’s a reason the polls are close.  The economy is going strong in central Ohio, and the 12th District, which in Richland Country, follows I-71 south to touch down in the northern suburbs of Columbus, then sweeps east to Newark and Zanesville, includes some of the fastest growing areas of the state and areas that, until recently, were in a prolonged slump.  But central Ohioans are notoriously, well, centrist in their politics, and for many people President Trump’s bare-knuckled, name-calling style of politics hasn’t been well received.

Interestingly, although the race has drawn national attention, there hasn’t been a lot of chatter about it in our town, outside of Democratic and Republican circles.  I think many voters are keeping their cards close to their vests and are still making up their minds, and I wouldn’t even venture a guess on which way the race will go.

Many Democrats are hoping for a Blue Wave come November that will turn control of the House and Senate over to the Democrats and allow them to block President Trump’s initiatives.  If the Democrats can win the 12th District today, the Blue Wave may well have started rolling just north and east of Columbus.