I was sorry to read of Burt Reynolds’ passing today.  He was a huge Hollywood star in his heyday, but he never seemed to take himself, or his acting ability, too seriously — which is an all-too-rare quality in the film and television industry these days. 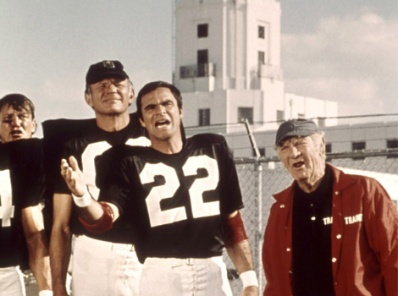 Reynolds’ death has caused some people to debate what was his best movie.  I think Deliverance is great — and Dueling Banjos clearly was the single best song — but for my money the original version of The Longest Yard can’t be beat.  It came out when I was in high school, and it combined everything that would appeal to an adolescent boy — sophomoric humor and pranks, football and football players, a ridiculously implausible plot, crotch hits to bad guys, and the use of Burt Reynolds’ overwhelming sex appeal to convince the warden’s pasty-faced, beehived secretary (played wonderfully by Bernadette Peters in one of her first big roles) to part with some much-needed game film.  In fact, you can argue that no single movie is more calculated to appeal to teenage males.  And watching it, even now, remains a guilty pleasure.

RIP, Burt Reynolds, aka Paul Crewe.  Adolescent boys of the ’70s salute you.