If you needed further evidence that the world is a weird place, here’s something:  you can actually buy a hat made with authentic woolly mammoth hair for only $10,000. 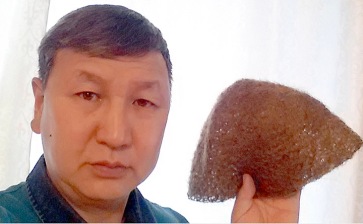 The hat has been put up for sale by Vladimir Ammosov, a man from Yakutsk.  His relative had gone to the “woolly mammoth graveyard” at a village in Yakutia and filled a plastic bag with woolly mammoth hair.  (In this part of Siberia, hunting for remains of the gigantic, shaggy, elephant-like creatures who thrived during the Ice Age is a popular local pastime — hey, what else are you going to do in Siberia? — and there is a lively trade in mammoth remains, especially tusks.)  The relative needed cash, and sold the bag of hair to Ammosov, who then had to decide what to do with it.

First, Ammosov got the expert at the local mammoth museum to confirm that the bag did in fact contain mammoth hair, then he decided to have the woolly mammoth hair crocheted into a head-hugging hat in the traditional Yakutian style.  Typically, the hats are made of horse hair, but the ancient mammoth hair served just as well.

It’s not exactly a flattering piece of headgear, and because mammoth hair was coarse — after all, it served as protection against the cold during an Ice Age — the hat is described as “prickly” to wear.  It was put up for sale in August, but I’ve found no follow-up stories to indicate whether it has actually been sold.  Could it be that there is no one out there willing to pay $10,000 for an ugly, uncomfortable hat woven from the hair of extinct, long-dead creatures?  Maybe the world isn’t quite as crazy as we think.