I don’t know what’s harder to read about right now:  political news, or the stock market. 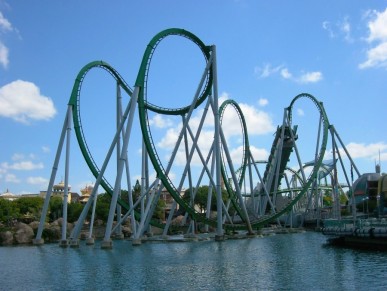 Since I don’t want to lose any readers, we shan’t be talking about political news.  But checking out what’s been going on in the stock market recently is equally stomach-churning.  October has been one of the worst months in the stock market in a very long time, generating talk that we’re in the midst of a dreaded “correction.”  Even after springing back up by more than 400 points yesterday, the Dow Jones Industrial Average is still down almost 6 percent this month, making it the worst month since August 2015.  The news for the S&P 500 has been even worse:  in October its down almost 8 percent, its worst month since May 2010.

And for those of us who aren’t working on Wall Street, the movements of the markets seem random and inexplicable.  Stock are down, then up, then down again — sometimes, all on the same day.  On Monday, the Dow surged upward, then plummeted, and ended up covering more than 900 points in its abrupt mood swing.  You read the reports on the markets that try to make sense of the movements — on Monday, for example, the stated culprit for the downturn was concerns about new trade actions with China, and on other bad days it’s those nefarious “profit takers” — and you really wonder if anybody knows why the markets move as they do.  And this shouldn’t come as a surprise, either:  after all, the markets are the sum of the actions of millions of individual investors, mutual funds, trading bots, institutional investors, portfolio traders, brokerage firms, foreign investors, and countless other actors.  It would be an unusual day, indeed, when all of the disparate participants in the market are motivated by the same news to take the same actions on the same day.

So, what’s a small investor to do?  I think the key is to not overreact, and to realize that investing in the market is supposed to be a long-term thing.  The little guy is never going to have the information the big players do and can’t plausibly time the market or anticipate the abrupt movements.  If you’re in the market long-term, don’t get distracted by the sickening plunges or the big climbs, because you’re really focused on what’s happening over the course of years.  And if you can’t take a long-term view, maybe you shouldn’t be in the markets at all.

Ignoring that stock market app on your phone helps, too.