The Christmas classic Rudolph The Red-Nosed Reindeer was broadcast on TV recently.  It’s the timeless story of a misfit reindeer with the brilliant nose who ultimately saves Christmas during the Storm of the Century — and a misfit elf who wants to be a dentist rather than making toys.  First broadcast in the ’60s, Rudolph and its songs has been enjoyed by multiple generations of American kids. 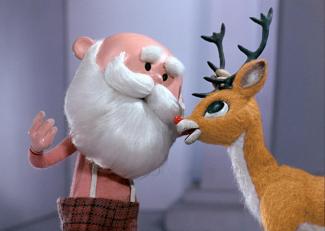 Until this year, I guess.  In the modern politically correct era where people are a lot more sensitive than they’ve ever been before, Rudolph doesn’t fare quite so well.  After all, the other reindeer are mean to poor little Rudolph at the Reindeer Games after Rudolph’s false nose falls off, and neither Coach Comet nor Rudolph’s own parents really stick up for Rudolph’s right to be different.  Poor Hermey the elf is facing a long life on the toy assembly line where he will be forced to hear the irritating chorus from We Are Santa’s Elves (Filling Santa’s Shelves) over and over again.  Hermey’s got no chance to follow his dental dreams.  Yukon Cornelius is not only a blustering blowhard, he’s a prospector who wants to tear up the landscape in search of gold when he’s not stalking and tormenting the Abominable Snowman.  And the poor Bumble, at heart a gentle soul beneath his terrifying exterior, ends up tortured by having all of his teeth pulled by people who won’t let him be himself.

And Santa, too, doesn’t exactly make a great impression, does he?  He’s certainly not very sensitive to Rudolph’s needs, or all that interested in celebrating Rudolph’s diversity.  At first he’s a bullying, self-absorbed boss, cracking the whip on the slavishly working elves and the reindeer to make sure that he can pull off another Christmas.  Even after Mrs. Claus succeeds in fattening him up and making him look a bit more jolly, he sees the light from Rudolph’s nose and embraces Rudolph’s shiny difference only when the Storm of the Century leaves him no choice.

Of course, all of these plot lines have been part of Rudolph since the beginning — we just haven’t seen the story in this light until now.  And yet, somehow, the kids who grew up watching Rudolph every holiday season ended up being reasonably well-adjusted people who aren’t out there yanking out the teeth of every passing Bumble just for the fun of it.  In fact, you might say that the story of Rudolph and Hermey and the challenges they had to overcome made those viewers just a little bit more receptive to the idea that people can be different — and that’s okay.  Would that message have the same impact if Rudolph and Hermey had been treated like champions from the outset?