There are some notorious dates in American history.  FDR declared December 7, 1941, the date of the Japanese attack on Pearl Harbor, “a date that will live in infamy.”  September 11, 2001 obviously is another, and so is April 14, 1865 — the day John Wilkes Booth shot Abraham Lincoln, and sent history veering off into a different direction. 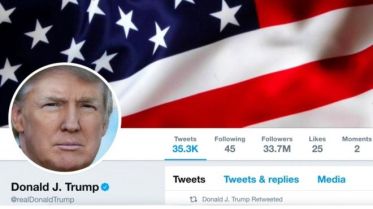 Should February 5, 2013 join them in the annals of infamy?

Why?  Because, according to this interesting article in Politico, that’s the date Donald Trump learned how to send tweets all by himself.  Before then, all of The Donald’s tweets were typed and sent by his social media manager.  But on February 5, 2013, Trump personally composed and issued a tweet that was a simple thank-you to an actress who said something nice about him . . . and the rest was history.

Of course, you can’t really equate mastery of Twitter with a bombing that pulled America into World War II, or the assassination of the greatest President in American history — but the Twitter breakthrough clearly has had profound implications.  Before, politicians and Presidents tended to communicate with the American people primarily through speeches and prepared statements that could be carefully vetted.  Now, tweets are issued directly from the President himself, without any ghost-writing or review.  Ill-advised 140-character (now 280-character) blasts thumbed in at odd hours can set a new direction for American policy or radically change the news cycle.

In my view, that’s definitely not a good thing.  But the genie has escaped the bottle, and you wonder if we’ll ever get back to the day when there is some kind of gravitas and mystique — and distance from the masses — to the office of the Presidency again.

And here’s an even more disturbing thing:  according to the Politico piece, President Trump’s former social media manager is advising him to “up his game” on social media and engage more personally with his supporters, by making his Instagram account more interesting and doing things like live-streaming from the Oval Office.  Hey, what could go wrong with that?