Last night we boarded a plane in Columbus at about 6 p.m., as dusk was falling.  The plane took off and headed west, flying through the gray, turbulent Midwestern skies toward the rapidly setting sun. 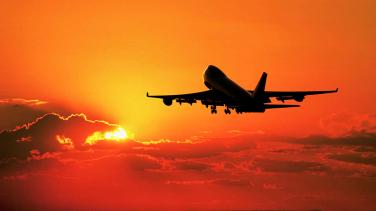 Soon it was black outside.  From a look out the window and past the wing you could just make out the dim outline of the darkened ground far below, with a few winking lights of small towns rolling past to mark our progress.  We chatted, dozed, fiddled with our cell phones, drank our free beverages, and ate our complementary snacks as the long flight wore on.  Hours later, we landed in utter darkness at a faraway airport, boarded a shuttle bus to the rental car center, grabbed a random SUV for our rental car, and hit the highway, heading southeast.

It was dark as pitch outside and for most of the way the highway was under construction.  You couldn’t really see much of anything other than the rising moon backlighting light cloud cover, the temporary lane barriers that made us feel like we were driving through a narrow tunnel, the taillights of the tractor-trailers we were passing, and the blinding headlights of the oncoming cars.  We hadn’t had dinner, so we stopped at a Burger King to get a a very late, generic — but welcome — fast food meal.

We finally arrived at our destination at about 11:30 p.m. local time, dropped our bags, and hit the sack.  This morning I’m up early, local time, because I haven’t adjusted to the new time zone — and also because I’m excited about where we are.  But because we traveled entirely under cover of darkness last night, our location doesn’t seem quite real yet.  It won’t, not really, until the sun rises and we get a good look at our new surroundings for the first time.

It’s exactly why I like traveling under darkness.  There’s a certain mystery to moving from point A to point B at night, when you can’t actually see landmarks and process the change in topography.  You don’t get the big reveal until morning comes and you find yourself on a new day in an entirely new place.

Where are we, exactly?  In an hour or so we’ll find out.

1 thought on “Traveling Under Cover Of Darkness”