As the Columbus Blue Jackets have moved forward in the NHL playoffs, there’s been a lot of buzz at the national level about how loud the crowd is during home games at Nationwide Arena.  Between the cannon blasts and the screaming fans, the consensus is that the home crowd gives the CBJ a decided home ice advantage.  My friends who have gone to some of the playoff games — to the extent their ringing ears allow them to understand human speech at all — have confirmed that yes, it’s loud. 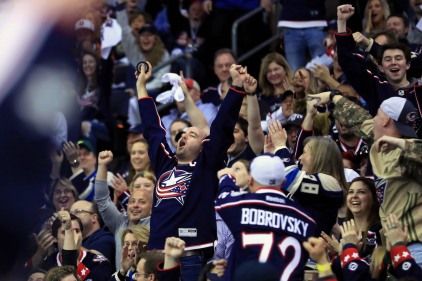 A story in the local press offered some scientific evidence of just how loud Nationwide Arena has been.  Using a decibel meter to measure the noise level, the article reported that it was 98 decibels — about the noise level of a snowmobile — before the most recent playoff game even started, the noise increased to 111 decibels (chainsaw level) when the teams took the ice, and the pandemonium topped out at 118 decibels (just about the noise of an ambulance siren passing by) when the game ended and the Blue Jackets took home a victory to move into a 2-1 series lead against the Boston Bruins.

It’s pretty impressive, but it’s worth pointing out that the Nationwide Arena fans are still far off the loudest crowd noise ever recorded at a sports event — 142 decibels, during a 2014 NFL playoff game in Kansas City.  That level of deafening noise might be out of reach, but for game 4 of the Boston series, tonight, Blue Jackets fans are aiming to get up to 125 decibels, which is about the level of a jackhammer.

It’s all very interesting to me, because I’m learning something new about my fellow Columbusites.  I wouldn’t say that Columbus sports fans are a sit-on-their-hands group, but I also haven’t thought of them as a raucous mob capable of producing a constant, pulsating ear-splitting din in support of their hometown teams.  Apparently I’ve been wrong all these years — it’s just taken a little NHL playoff run to up the uproar level and bring out the bedlam.

Going to Nationwide Arena for one of these games would be a great experience, but be sure to bring your earplugs.