Two recent surveys have identified what is being depicted as a “new trend” on the dating scene:  the “foodie call.”  It happens when one person goes out with another person that they really aren’t that interested in — just to get a free meal. 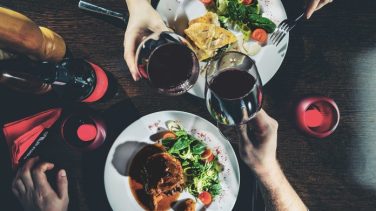 The two surveys of heterosexual women were conducted by Azusa Pacific University and the University of California-Merced, and the results were published in the journal of the Society for Personality and Social Psychology.  The participants were asked questions about their personalities, the views on gender roles, and their views, and personal histories, with “foodie calls.”  In one survey, one third of the respondents admitted to going out on a date just to get a free meal, and in the second survey 23 percent of the study group admitted to a “foodie call.”  The research also found that the majority of respondents were aghast at the concept of a “foodie call” and believed it to be moderately to extremely unacceptable.

What are we to make of “foodie calls”?  Speaking as someone who enjoys a good meal from time to time, I don’t think being motivated, in whole or in part, to go out on a date to get a good meal is incredibly egregious behavior.  I also think, however, that people who go on “foodie calls” might be selling themselves short, and I wonder if they ultimately find the meals very satisfying.  Spending two or three hours with somebody you really have no interest in and making cheery chit-chat that entire time would be exhausting, and is a pretty high price to pay for some fine dining.  Meals are supposed to be a pleasant, shared experience, and having to work hard to maintain a conversation would tend to interfere with your enjoyment of the cuisine.

As for the guys who’ve paid for the “foodie calls” — well, if the person you’ve asked out starts negotiating with you about the only restaurants that would be acceptable destinations for the date, you might just want to be on guard.