Here’s another story to add to the slew of news articles about general health trends:  human beings, on average, are getting weaker.  In this case, the indicator is grip strength — that is, how much holding and squeezing force can a person generate with just the fingers of their hand.  Recent studies have indicated that grip strength has declined significantly, even in the last 30 years. 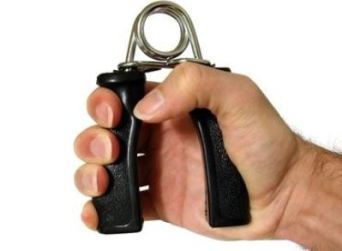 So what, you might ask?  You’re less likely to encounter the guys who give you a bone-crushing handshake, and you don’t see people walking around flexing those hand exercisers anymore.  What’s the big deal?  The big deal is this:  grip strength is one of those inverse health indicators lurking in the human body, with lower grip strength associated with increased mortality from all causes and cardiovascular mortality in particular.  And, especially for those of us who are getting up there, grip strength is a key indicator of sarcopenia, the loss of muscle that occurs as we age, and may also indicate issues with cognitive performance.

Why is grip strength declining?  Of course, gripping is a key part of the evolution of homo sapiens — whose distant ancestors needed a strong grip when they were swinging through trees, and whose more recent predecessors used their hands to create and then wield tools and weapons that allowed them to survive predators and gather food.  In short, humans needed that strong grip to make it through the natural selection melee and emerge at the top of the evolutionary pyramid.  But in recent years, the need for hand strength at home or on the job has declined.  White collar workers need hand dexterity as they tap away at computers, not hand strength, and even blue collar workers now use automatic tools that don’t need the kind of personal strength that hand wrenches of the past, for example, required.  Mix those factors in with a general decline in fitness and increase in obesity, and you’ve gone a long way to explaining why human beings increasingly are becoming a bunch of unhealthy softies.

In short, as a species humans may be losing their grip.  It’s not a positive development.