Yesterday I flew home through an airport in Anytown, U.S.A.  As I walked from one concourse to another to get to the gate for my connection, I passed a woman pushing a stroller.  In the stroller, a little girl — who was probably about four years old — was watching her own little TV and had headphones on so her enjoyment of the program wasn’t disturbed by the surrounding hubbub.  She was oblivious to everything except what was happening on her nifty pink device. 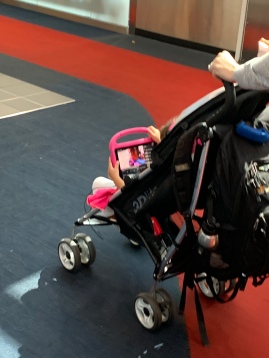 It struck me as an interesting parenting choice.  Going to a modern airport has got to be a cool, interesting experience for a kid.  There’s a lot going on — bright lights, brisk movement, diverse shops and signs, announcements, unknown people, different languages — that would help a child to understand that it is a big world out there with many things to see and understand.  In short, it’s a learning experience.  And if your kid has lived a sheltered life, being pushed through an airport concourse under the watchful eye of Mom is a pretty good, and safe, way to be introduced to the bigger picture.

But this particular little girl was missing out on all of that.  She was in her own lworld, watching a TV program that she had probably seen multiple times already and plugged into her headphones, oblivious to pretty much everything that was going on around her.

In fairness to the Mom, maybe the little girl was exhausted and on the verge of a tantrum, and the path of least resistance was to let her watch her program until she fell asleep. avoiding a full-blown airport meltdown.  If so, that’s a parenting choice that the other travelers, myself included, would applaud.  But it’s also possible that for this little girl, with her very nifty portable TV screen, watching TV programs rather than the world passing by is the default approach whenever she gets into the stroller, whether her mood is good or bad.

We’ve read a lot lately about younger people feeling disconnected, unsatisfied, and at times depressed by the on-line, TV/computer screen world in which they spend so much time.  Maybe the answer is to take away the TV and let kids have a bit more interaction with the real world and the real people in it.  A stroller ride through a busy, bustling airport seems like a pretty good place to start with a device-free approach.