Sometimes you wonder if the federal government consciously does things to make you think it’s out of touch with reality.  Here’s one recent example:  the federal Energy Star program, which is jointly run by the Department of Energy and the Environmental Protection Agency, has come out with recommendations on how to operate your themostat during the hot spring and summer months. 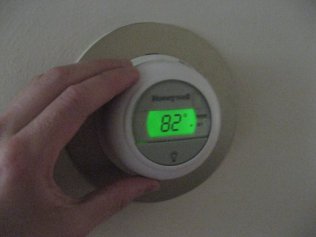 According to Energy Star, during spring and summer you should set your central air conditioning thermostat to 78 degrees when you are at home.  If you’re not going to be at home, you should set the temperature to 85.  And when you’re sleeping, you should set the temperature to 82 degrees — or higher.  That’s right — 82 degrees.  And, just in case you can’t make basic, practical decisions without federal government instruction, Energy Star also recommends opening the windows on cool nights to let cool air into your house, and closing the windows during the day so hot air doesn’t invade the premises.

According to Energy Star, every additional degree at which you set your thermostat produces a three percent decrease in your utility bill.  No doubt that is true — but has anyone at the Energy Star program actually tried to get a good night’s sleep in a house where the thermostat is set at a sweltering 82 degrees?  The quality of my sleep is directly tied to the temperature of the room where I’m sleeping.  If it’s above 69 degrees, I’m going to be spending a miserable night tossing and turning in hot, swampy sheets.  If it’s 69 or below — as occurs in Maine, where we don’t even have air conditioning and instead open the windows and sleep in delightful cool breezes — I’m much more likely to sleep soundly.  Trying to sleep in the Energy Star recommended 82-degree room would be a nightmare — except I wouldn’t be able to fall asleep to have the nightmare in the first place.

I can’t imagine trying to sleep in 82 degrees, or coming home to a house that where the internal temperature is 85 degrees, or higher.  It seems to me that enjoying the coolness, and getting a good night’s sleep in the process, is the whole point of air conditioning.  So thanks for the tips, Energy Star, but I’ll nix the 82-degree sleep setting, because to me a good night’s sleep is easily worth the additional utility bill cost.  In fact, I’m willing to pay just about anything for a few hours of uninterrupted, cool, peaceful slumber.