When I went to the grocery store yesterday, I walked down an aisle and saw, to my dismay, that Halloween stuff was on sale already — even though it’s just the beginning of September.  But I was really stopped in my tracks when I saw this product for sale, right there next to the bags of candy and trick or treat decorations. 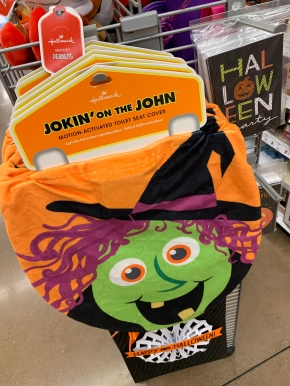 It’s a “Jokin’ on the John” motion-activated toilet seat cover.  Put this on, and when the lid to the commode is lifted, you get treated to one of several jokes delivered by this crazy-eyed cackling witch.  It’s one of a number of “Jokin’ in the John” products that can help you celebrate Halloween.  Others include “Flush ‘n Stein,” a motion activated Frankenstein figure holding a plunger who is supposed to be put on top of the toilet and then tells jokes and sings a song, as well as a wisecracking ghost armed with a plunger and a mummy-type figure whose wrapping is toilet paper.

An entire “Jokin’ in the John” line of products, offered by Hallmark, of all places?  Apparently the bathroom, one of the last bastions of peace and quiet and normalcy in an overdecorated holiday world, is viewed as the new frontier for holiday-themed “humor” products.  It’s there, ready to be invaded by cackling witches and other intrusive figures whose handful of allegedly funny phrases would get old pretty darned fast.  And speaking as a representative of the older generation that now has to make more nocturnal visits to the bathroom than they used to, I can’t imagine wanting to have any talking, motion-activated items in there to startle me when I stumble in at 3 a.m.

It’s bad enough that Halloween now gets celebrated for about two full months — can’t we leave the bathroom out of it?