In the new product development department, the other day I ran across a news story on the “wearable chair.”  It’s a contraption of bands and extendable aluminum legs;  you strap it to your keister and it allows you to sit wherever and whenever you want to do so. 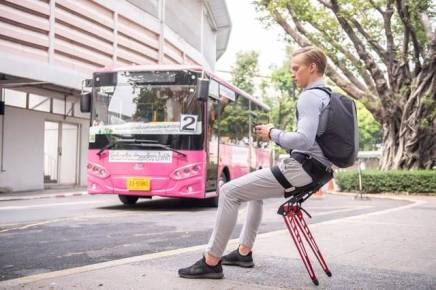 It’s an ungainly looking device, to be sure, and it gives the people sitting on it a distinctly bionic, quasi-insectoid appearance.  It seems like a pretty clumsy thing to wear around, and if you’re in a crowd it looks like it would take up space that might not be appreciated by the other people on, say, the subway train.  Presumably there are rigorous weight limits for the wearable chair, too.  It’s supposed to help with your posture, though — which doesn’t surprise me, because the photos of the product make it look like you need to sit in a particular, erect way or weight distribution issues would otherwise cause you to go tumbling to the ground.  No slouching when you are strapped into the wearable chair!

I guess we’ll find out whether there’s a market for the wearable chair.  It seems hard to believe that there are enough people who become so fatigued at the spur of the moment that they can’t find a chair or bench — or even spot on the grass — where they can sit, and would rather extend limbs from an exoskeleton on their butt and draw curious attention to themselves.  Maybe modern people have become so lazy and in need of instant comfort that the wearable chair will be a big success.  In a world struggling with obesity, however, it seems like we’d all be better off if people had to actually stand while waiting for a bus or train rather than plopping down wherever they wanted.

How long do you suppose it will be before somebody decides to combine a wearable chair with a standing desk?