There’s something magical about the day after the Ohio State-Michigan game — when your team wins, that is. 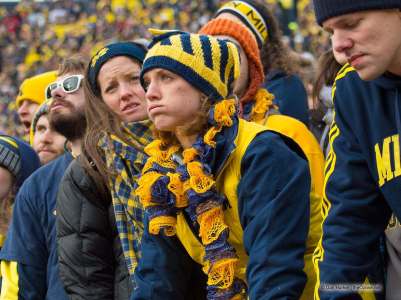 This year, the Buckeyes crushed the Wolverines, 56-27.  And, they did it at the Big House, in a game where Michigan came in playing their best football, with a chance to ruin Ohio State’s season and atone for years of losses.  For a time, Michigan looked like it could play with the Buckeyes . . . but eventually the Michigan mistakes piled up, the Wolverine defense had no answer for the multi-dimensional Ohio State offense, and before you knew it Ohio State had sprinted to a 20-point lead and the game was effectively out of hand.  By the end of the game, the camera was showing sad Michigan fan faces, and the “OH – IO” chant was reverberating around Michigan Stadium thanks to the hardy members of Buckeye Nation who went to support their team in enemy territory.

For Michigan, it’s the kind of brutal loss that sticks with a team and a program and a fan base, and leaves them searching for a way forward and wondering when — if ever — the pain will end.  For Ohio State fans who spent their own time in the desert during the ’90s, those shots of sad Michigan faces, and the message board and YouTube rants of disappointed Michigan fans, will always be sweet.

As I watched The Game with Russell, I mentioned how different the rivalry is now from when I grew up in the ’60s and ’70s.  In those days, the Ohio State-Michigan game was typically a tough defensive struggle between two evenly matched teams.  In the last two years, in contrast, Ohio State has scored 118 points and beaten Michigan by more than three touchdowns each year.  Ohio State has now triumphed over the Wolverines eight years in a row and 15 out of 16.  It’s amazing.

4 thoughts on “Enjoying The Day After”