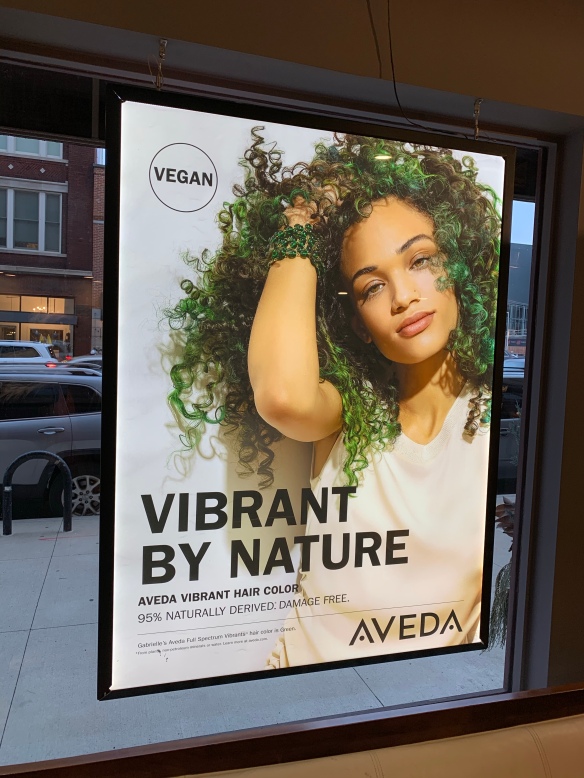 Waiting to get my haircut today, I noticed this sign. I don’t color my hair, so I don’t know beans about hair coloring products. But vegan? Wait, people ingest this stuff?

People who rely on governmental services get used to waiting.  You fill out a form and then wait for weeks, or months, or even years before the ponderous bureaucratic machinery moves forward and action is taken.

But even by slow governmental standards, the city of Winnipeg, Canada moves at a glacial pace.

On January 26, 1993, a city snow removal machine smashed up the curb outside the house of Calvin Hawley.  Hawley promptly made a complaint to the city, so that someone could come out to fix the curb.  The city promised repairs.  When nothing happened, he continued to call.  At one point, the city told him that its system for logging complaints had changed, and all of his prior communications about the broken curb had been lost.  But Hawley was undeterred in his campaign to cure the curb.

In 2017, when city work crews appeared on his street, Hawley thought his day had come.  Alas!  The city workers were there to fix other, more recently damaged broken curb sections.  It just added insult to injury.  So Hawley filed an electronic complaint, which allowed him to track when the repairs to the curb would move forward.

Last year, Hawley got his answer:  his curb will be repaired by June 26, 2037 — which would be more than 44 years after the city snow plow first crushed it.  44 years!  Think about that the next time you moan about having to wait in line at the BMV.