There’s a reason the nuns in The Sound Of Music sang that Maria was “unpredictable as weather.” The only thing predictable about Midwestern winters is that they are gray, wet, and cold — but the precise combination of those qualities varies.

Every once in a while, however, the fates align and a flukey day happens — like today. Sunny, and a high of 55? It’s a day to sit outside and bank some of that warmth and sunshine before tomorrow’s gray chill closes in.

In addition to being Groundhog Day (and let’s all hope that Punxsutawney Phil is right in predicting an early spring, by the way ) today is also Palindrome Day. 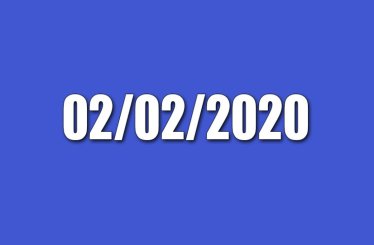 That’s because, for the first time in 909 years, the date written out in Arabic numerals — 02/02/2020 — is the same when read backwards or forwards.  That’s true whether you put the month first, as Americans do, or the day of the month first, as Brits and Euros and others do.

As someone who goes by Bob, I’ve got a soft spot for palindromes.

The last time a Palindrome Day happened was on November 11, 1111.  I’m skeptical that anyone mired in the Dark Ages ever actually wrote the date out as 11/11/1111, because I don’t think that approach to writing out dates became prevalent until centuries later, but that’s the last time the palindrome effect occurred.  We can all aspire to make it to the next Palindrome Day, which will be in 101 years, on 12/12/2121.  With some clean living and exercise, why not?  After that, we won’t see the next Palindrome Day until March 3, 3030, or 03/03/3030.   Let’s hope that humanity is around to celebrate it!

The Idagio cellphone app offers a “radio play” feature that allows you to listen to the music of favorite composers — and a little else, besides.  From time to time, the folks at Idagio will include a piece by a different composer, just to mix things up a little.

That’s how I discovered the music of Giovanni Battista Viotti.  I was listening to “Mozart radio” and a piece that didn’t sound quite like Mozart began playing.  I checked the app and saw that the radio was playing a piece by Viotti — a composer that I had never heard of or, to my knowledge, listened to.  I liked the piece that was playing, so I decided to see if there was a Viotti radio option.  Sure enough, there was, and after listening to it I found that I liked Viotti’s work quite a bit.

Born in 1750, Viotti was a violin virtuoso who was a prolific composer of violin-centric concertos and other pieces.  It’s not surprising, therefore, that the violin features prominently in his pieces.  He lived a colorful life that saw him working at the court of Marie Antoinette, became embroiled in the French Revolution, and was later expelled from England for a time due to concerns about his potential revolutionary sympathies.  Along the way Viotti and his Stradivarius helped to establish the French school of violin playing, and his compositions influenced Beethoven and Brahms.

Viotti doesn’t exactly get a warm reception from the critics — and I suspect that the fact that some music historians view him as a kind of suck-up to the nobility of the day doesn’t help the reviews of his music.  One article about him, for example, says that the quality of his playing was vastly superior to his compositions, variously describing them as “sweet but anaemic” and “tedious.”  Another article acknowledges that Viotti’s music was admired by his contemporaries and that his violin concertos show true compositional prowess, but his other pieces are “relatively uninspired.”

Not being a musical scholar or analyst, I can’t comment on Viotti’s composition — but I can say that I like his music quite a bit.  It’s very melodic and often uplifting, and is great walking music.  I particularly like his Concerto for Violin and Orchestra No. 15 in B flat major and its jaunty third movement.  It and other pieces have been added to my Idagio list of favorites.

One lesson in the College of Musical Knowledge is that you shouldn’t let what critics say define your personal playlist.  I enjoy Viotti’s music, and I really don’t care whether he’s acclaimed by modern critics or not.