The electoral debacle in this year’s Iowa caucus has had one positive effect:  it has made other states carefully examine their election processes, in hopes that they won’t become “the next Iowa.”  In Nevada, for example, officials took a hard look at the 2020 Iowa caucus and made several changes to the planned Nevada caucus procedure, including getting rid of apps that were going to be used and going instead to paper ballots.  Even so, many people have concerns about the Nevada caucus, which starts in a few days. 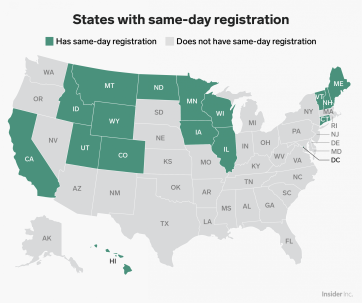 In Ohio, where the primary won’t occur until next month, the concern isn’t about apps, caucus rules, or complicated vote-counting procedures.  Instead, some people are questioning whether the turnout in Ohio elections should cause Ohio to address a more fundamental issue:  the process for registering to vote and then voting.

This article from the Executive Director of the ACLU of Ohio frames the issue.  It notes that the turnout in the 2018 mid-term elections in Ohio was about 50 percent of registered voters, placing the Buckeye State’s participation percentage at 29th out of the 50 states.  The turnout by voters in the 18 to 24 group was especially pathetic.

But, what causes low turnout?  The ACLU director rejects the possibility that some citizens simply lack interest, and instead contends that Ohio’s procedures discourage participation.  He advocates for abolishing the Ohio requirement that voters register at least 30 days before an election in favor of allowing “same day” registration and voting, and argues that would-be voters should be able to register at Ohio Bureau of Motor Vehicles offices.  He also supports making sure that early voting — a process that Ohio already follows — provides for ample evening and weekend hours and simple absentee procedures to allow people who work two jobs, live in remote areas, are homebound, or are serving in the armed forces overseas to cast their ballots without a hassle.

I’m in favor of taking a fresh look at Ohio’s procedures and auditing the elections in other states that have different procedures to see whether Ohio’s processes can be simplified and improved.  I have to admit, however, that I’m leery of same day registration and voting, which seems like a recipe for Election Day chaos and potential fraud — and therefore I’m particularly interested at an objective look at how that option has worked in other states.  I also wonder at the most fundamental premise in the ACLU director’s article:  if a voter can’t be bothered to register at least 30 days before an election, is it really the procedure that is keeping that voter from the polls, or is it good old-fashioned voter apathy, instead?

2 thoughts on “The Iowa Reboot”