I don’t feel much like writing about Ohio State’s nail-biter loss to Kentucky last night, and I doubt anyone feels much like reading about it, either.  It must have been a thrilling, wonderful game to watch if you were a disinterested fan who just liked college basketball.  The two squads were evenly matched and the game was back-and-forth and closely contested, with the teams within a few points of each other throughout the second half.

For an Ohio State fan — and even more so, I am sure, for Ohio State coaches and players — this one was a very tough one to take.  Ohio State had its opportunities but could not capitalize on them; after shooting lights out for a series of games the Buckeyes struggled to put even open shots and free throws into the basket.  That happens, at times, in sports.  Credit must be given to Kentucky, of course.  Their coaches came up with a good game plan and their players executed it.

So, for the second year in a row Ohio State bows out in the Sweet Sixteen after a tough, hard-fought loss to a talented SEC team.  The loss will sting, because this group of Ohio State players was a pleasure to watch and clearly had the ability to win it all.  The fact that they didn’t, however, doesn’t detract from what was really an exceptional season.  I will very much miss watching these guys play.

Tonight Ohio State and Kentucky face off in Newark, New Jersey for the right to move along into the Elite Eight.  Ohio State will hope to avoid the kind of upset that has knocked out Duke and Pitt, and Kentucky will try to beat Ohio State for the first time in an NCAA tournament. 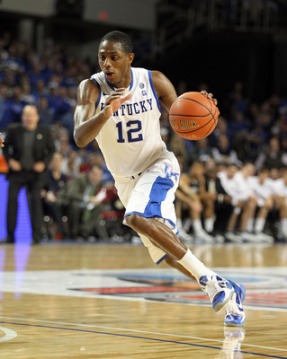 Late starting time aside — the game is projected to tip at 9:45, which probably means after 10 p.m. — this should be a terrific contest.  Kentucky is one of the most storied teams in college basketball, with a jaw-dropping tradition that features 51 NCAA tournaments, 13 Final Fours, and seven national championships.  The Buckeyes are currently the consensus number one and are looking to build on the tradition that has developed since Coach Thad Matta arrived.  Both teams are hot and have come to the NCAA tournament after winning their conference tournament.  Both teams feature an exciting mix of freshmen — in the Wildcats’ case, guard Brandon Knight and forward Terrence Jones, the two leading scorers — and upperclassmen.  In Matta and Kentucky’s John Calipari, both teams have coaches who have taken different teams deep into the NCAA tournament.

Every game in the NCAA tournament seems to turn into a game of matchups, and this game should be no different.  Kentucky fans believe Knight will be the best guard Ohio State has faced this season; Buckeye fans hope that Aaron Craft can display some of his defensive prowess and hound Knight into turnovers and bad shots.  Ohio State fans think Jared Sullinger should be able to dominate inside; Wildcats supporters are confident that 6-10 senior Josh Harrelson (known as “Jorts” for some unknown reason) will be able to hold Sullinger in check.  Kentucky wonders who will guard the 6-8 Jones, who can both drive and launch from the outside, and Ohio State asks who will be matched against lanky William Buford.  Other questions abound.  Can David Lighty penetrate and dish?  Will Kentucky try to play an up-tempo game or slow it down?  Will Jon Diebler be hot from behind the arc?  Will early foul trouble set one team back?

Fans of both teams seem to be complaining that this great tilt is happening this early in the tournament.  I think it is one of the things that makes the NCAA tournament such a terrific event.  Whichever team advances after tonight’s game will feel like it has really accomplished something.  I’m hoping that team will be Ohio State.

One of the many pleasant surprises for this year’s Ohio State basketball team has been the play of Aaron Craft.  Craft, a freshman, typically comes into the game about five minutes in to play the point.  He brings the ball up, doesn’t seem to get rattled by pressure, can drive the lane and dish, and has made some great passes as the Buckeyes have moved into the Sweet Sixteen.

What really distinguishes Craft, however, is his defense.  Although a few opponents have had great games against him, for the most part he has been a terrific defensive player.  Opposing point guards seem to wear him like a shirt.  He is always there, right in front of them, moving when they move and letting his lateral quickness get him to the spot before they do.  It must be incredibly frustrating to be guarded by Aaron Craft.

Craft’s uncanny ability to seemingly always be in front of the opposing point guard reminds me of a classic episode from the original Star Trek TV series.  The Enterprise is minding its own business, boldly going where no man has gone before, when suddenly a giant hand appears in front of the ship.  The Enterprise tries to get away from it, but wherever it goes the hand is there, until finally the hand catches the ship and the crew learns that the hand belongs to Apollo.  Mayhem ensues.

I imagine that the frustration felt by opposing points guards who have to deal with the pesky, ever-present Craft is similar to the frustration felt by Captain Kirk when he could not escape the giant hand of Apollo.  I’m not suggesting that Aaron Craft wears a toga in his spare time or can hurl lightning bolts from his fingertips, of course.

If your team makes the NCAA Tournament, you should be happy, right?  Yes, but . . . .  Fans of every team that is in The Big Dance are either complaining about how their team is seeded, or complaining about their regional being the toughest, or both.  Some members of Buckeye Nation are whining — again — that the Buckeyes’ regional has the toughest field of teams.

Enough already!  As I said before last year’s tournament, no whining permitted!

Fortunately, the Buckeyes themselves have the right attitude.  They welcome the challenge and know that they need to prevail over great teams if they hope to win the NCAA Tournament championship.  If you want to be the best, you need to beat the best.  Ohio State fans could learn a thing or two from the players.

You so often read and hear about bad conduct by student athletes, it is refreshing to read about acts that reflect class and sportsmanship — and when the student athletes in question play for the team you root for, it is even better.

Yesterday, after Ohio State had beaten Penn State in the Big Ten Tournament championship game, and after both teams had learned that they were in the NCAA Tournament, Buckeyes Jon Diebler and Jared Sullinger went to the Penn State locker room to congratulate Talor Battle and the other Nittany Lions.  It was a nice gesture, and it was appreciated by the Penn State players.

Ohio State and Penn State played each other three times and have gotten to know each other as a result.  Any time a team makes the NCAA Tournament, they deserve congratulations, and it was nice to see Diebler and Sullinger deliver their best wishes to the Nittany Lions in person.  As for me, I think there is a lot to like in this scrappy Penn State team, and I’ll be rooting for them to do well — at least until they play the Buckeyes again.

UJ’ s post notwithstanding, every red-blooded American cares about the real March Madness — not some ever-present Social Security funding issues. Social Security problems will be around forever.  The NCAA Tournament, on the other hand, is a one-and-done thing where you live for the moment.  What could better epitomize modern America?

We are glad that the Ohio State Buckeyes, which won another Big Ten Tournament championship, are the overall number one seed.  It looks like the Buckeyes fared well in the brackets, and it looks like the Big Ten did well, too.

We’ll watch to see who wins the play-in game to face the Buckeyes, and we will watch the NCAAs with great anticipation.  We want to see the upsets, the underdogs, the last-second buzzer beaters, and the Cinderella teams.  It is a heck of a lot more entertaining, and uplifting, than thinking about Social Security funding.

It was very satisfying, indeed, to watch Ohio State crush Wisconsin today, 93-65.  The blow-out win was a fitting send-off to David Lighty, Jon Diebler, and Dallas Lauderdale, who will go down as one of the best — and certainly most beloved — senior classes in Ohio State hoops history.  It also was nice to see the Buckeyes “deal with it,” to use Wisconsin coach Bo Ryan’s deathless phrase.

Ohio State coach Thad Matta has molded together a really wonderful team.  It is staggering that the Buckeyes scored 93 points on the Badgers, who are one of the best defensive teams in the country.  Before today, Wisconsin had allowed only one team to score even 70 points.  But today, the Buckeyes beat the Badgers inside and beat the Badgers outside.  Jon Diebler led Ohio State in raining threes, as the Buckeyes shot a stunning 14 out of 15 from behind the arc.  Jared Sullinger, Dallas Lauderdale, and David Lighty also put up a lot of points in the paint, and the Buckeyes out-rebounded the Badgers as well.  Finally, Aaron Craft played a virtually flawless offensive floor game, dishing out 6 assists while having zero turnovers.  If Ohio State executes like that on the offensive end in the rest of its games this season, it will be a very hard team for anyone to beat.

On the defensive end, the Buckeyes shut down Jordan Taylor, who had torched the Buckeyes in Madison, and also took the Badgers’ excellent forward, Jon Leuer, out of his game.  The Buckeyes can play a suffocating man-to-man, as they did today, and their offensive efficiency also puts pressure on the opposing team’s offense.  When Ohio State is scoring on virtually every trip down the court, and often with a three, the temptation for the other team to come down and try to score quickly is difficult to resist — and often quick shots are bad shots.

The Buckeyes now need to put this very satisfying win behind them.  They move on to the Big Ten Tournament as the number one seed.  That tournament doesn’t mean much, except as a vehicle to cement an overall no. 1 seed in the NCAA Tournament.  The Buckeyes need to avoid injury, stay sharp, and let some of their back-ups play — and then they need to get ready for The Big Dance.