Yesterday we ventured over to Acadia National Park to hike up Mount Cadillac — the towering peak situated right on the coastline that is the first place in America struck by the rays of the rising sun.  It’s a popular destination that offers staggering views of the jagged Maine coast.  Most people drive up to the top — but heck, anybody can do that.  Hiking up is more fun and a bit of a challenge, besides. 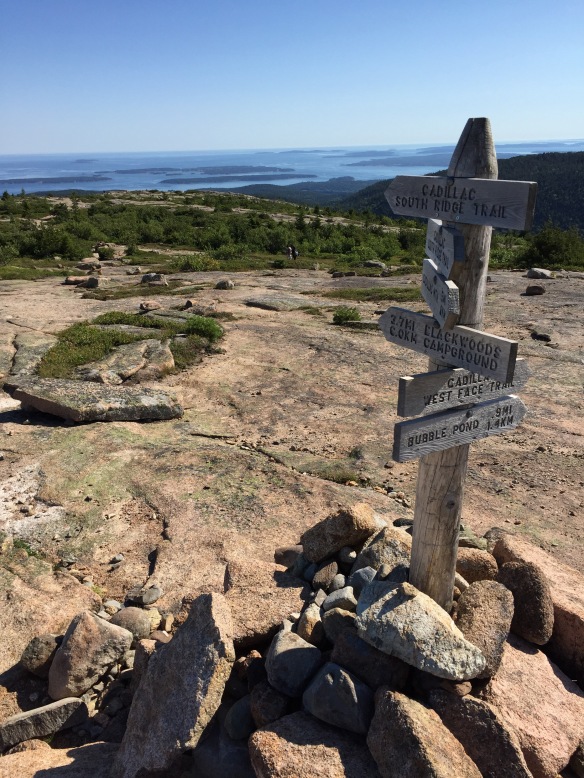 We chose the south ridge trail, which begins along a road and, for the first mile of so, takes you through a dense, almost primeval forest.  At that point you emerge above the tree line and are exposed to the first of the sweeping vistas that this hike affords — with views that just get better and better as you gain altitude.  You follow blue trailblazing signs painted on trees and then on the granite of the mountain itself, as well as rock cairns that also mark the way.

The trail takes you along the granite spine of the mountain, shown in the first picture above, and you actually feel like you are moving from knob to knob on the gigantic backbone of a huge, hunched-over creature.  Eventually you are treated to a commanding view in all directions and can see dozens of miles to faraway peaks in the Appalachian chain.  You also pass a beautiful pond that is covered with velvety, impossibly green shoots, shown toward the middle of the photo below, and you wonder:  “what is that doing way up here?”

It’s not a difficult climb, but it’s a rewarding one nevertheless.  When you reach the top, having clambered up the last few rock faces, you can stare slack jawed in any direction.  The rocks at the top are covered with people, and no wonder — the scenery is spectacular.  It’s one of those spots that simply can’t be captured in a photograph.  But I’ll always remember it.