There’s a significant and growing methamphetamine problem in South Dakota, and the state is trying to deal with the many issues — crime, death, health care, and others — that are all part of the problem.  As is typical these days, one element of the state’s response is an ad campaign, to raise awareness and let the citizens of South Dakota know that their state government is addressing the crisis. 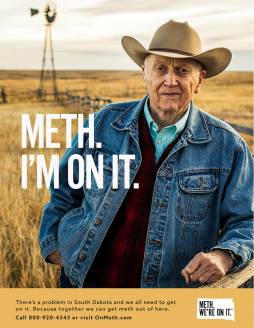 So, what ad campaign did South Dakota come up with?  One that features the tag line:  “Meth.  We’re on it.”

Of course, once the campaign appeared, the inevitable jokes started flowing, and South Dakota has become a bit of a laughingstock.  Newspapers in South Dakota have been weighing in on the campaign and resulting public relations debacle, and you can read some of their editorial reactions here and here.  The prevailing view seems to be that while the campaign may have achieved the goal of raising awareness of South Dakota’s meth problem — after all, it’s undoubtedly received far more national publicity than your average, run-of-the-mill “click it or ticket”-type public safety ad campaign — the embarrassment the state is experiencing due to the campaign probably  isn’t worth it.  And there’s the obvious lingering question:  couldn’t somebody in state government have recognized that this kind of reaction to the campaign was bound to happen?

There’s another, deeper question, too — why South Dakota felt that an ad campaign was needed in the first place.  The production of the ads cost $449,000, and when all of the ad spots are purchased, the total cost of the campaign will be about $1.4 million.  That’s a lot of money, and it’s entirely fair to ask whether it should have been spent on an any ad campaign — even a competently created one that didn’t make South Dakota the butt of jokes.  Wouldn’t the money have been far better spent on state programs that are specifically dealing with the meth problem, rather than ads featuring flinty-eyed ranchers and other South Dakotans?

South Dakota’s disastrous ad campaign may have raised awareness of the meth problem in an unexpected way, but maybe it also will raise awareness of the stupidity and waste caused by governmental TV ad campaigns generally.  Maybe the next time an ad campaign is suggested by a state agency in South Dakota or elsewhere, some thoughtful person will remember the “Meth.  We’re on it” flop, nix the ad campaign, and see that the money is spent instead on actually directly addressing the problem in question.

These owl ads are popping up all over Columbus. They’re on the sides of buildings, on the signs at the bikes to go stations, and on just about every other ad location you can think of.

I like the stern, alert owl picture, but there’s one big problem from my standpoint — the ad doesn’t say the name of the “university” that is being advertised. It’s pretty obvious that the whole point of the ad campaign is to pique your curiosity and get you to do a search for WGU, so you can find out what it is. Those campaigns are consciously designed to manipulate ordinary people — and I hate that.

So I hereby declare that I’m not going to be manipulated. I guess I’ll just have to go through life without learning what WGU is. Let the owl stare all he wants — I’m not biting.

I’ve been watching TV commercials for more than 50 years.  For my money, the greatest ad campaign in history was for Miller Lite in the 1970s.

The campaign’s task was daunting indeed — get men to drink diet beer.  Diet beer???  For the men of the ’70s, who were used to drinking Schlitz, and Stroh’s, and Budweiser, and other mass-produced beers of the day?  You have to convince beer drinkers to worry about how many calories were found in each bottle, when they’re used to downing a six-pack without batting an eye?  You’ve got to be kidding, right?

So they called it “lite” beer because they knew that calling it “diet” beer would be rejected as totally unmanly.  And, they came up with a memorable catch phrase — “great taste . . . less filling” — even though no beer drinker in the long history of suds ever gave a thought to a cold beer being too “filling.”  And to make the drink even more acceptable in the macho ’70s, they had retired athletes serve as the primary pitchmen for the new beer, in clever, funny commercials that often had the jocks ready to brawl to settle their shouted disagreement about whether “tastes great” or “less filling” better described the brew.  (To get a sense of the underlying testosterone in the commercials, take a look at this ’70s spot involving former NFL middle linebacker Dick Butkus, who was one of the most popular Miller Lite commercial stars in those early days.)

And somehow, it worked.  Miller Lite ushered in an era in which other brewers rushed to offer poorly conceived “light” beers — I once consumed an Iron City Light Beer, and barely lived to tell the tale — and what was at one time an American market that was dominated by a few boring pilsner products offered by large national brands started to diversify.  The trend continued, and now a trip to your local grocer is likely to present you with a dizzying choice of porters, stouts, Belgian ales, wheat beers, light beers, and even non-alcoholic brews, where once only Budweiser and Schlitz and one or two others were found.

I’m not saying that Miller Lite inevitably produced the craft beer explosion, but I do think the Miller Lite ad campaign created a crack in a closed market that soon was knocked wide open, and it did it with a clever name, a clever slogan, and funny commercials with ex-athletes — lots and lots of ex-athletes.  How many later ad campaigns for products for men followed that winning formula?