I was sorry to read about the death of Adam West — known to everyone over a certain age as Batman — this past weekend.  West, who was 88, died after battling leukemia.

Hearing about West’s death made me think, of course, about the Batman TV show that was enormously popular when I was a little kid.  The word that inevitably is used now to describe the show is “campy,” but really it was more about innocence.  Batman was just like a comic book of those days brought to life, with every punch marked by a Pow! or Whammo!, with characters who weren’t dealing with any “real-world” problems, and with a hero who constantly lectured Robin, the Boy Wonder, in an avuncular way, instructing him all on the platitudes about brushing your teeth and eating your vegetables and being a patriotic citizen that we kids were hearing all the time at home from our parents and grandparents.

Sure, the show was played with a wink, and usually Batman gave Robin the benefit of his wisdom as they were using a rope to walk up the side of the wall in an obviously fake way, just before some famous person put their head out of a window in a silly cameo appearance — but the fact is that the platitudes still got stated on network TV by a hero who apparently meant every word, the hero always escaped from whatever devilish contrivance the Joker or the Penguin or the Riddler put him into, and in the end truth and justice and the hero prevailed . . . and nobody really got hurt beyond taking a few punches to the jaw, either.

The show worked because the theme song was cool, the Batmobile was cooler, and Adam West played Batman right down the line, delivering his homilies and interacting with Commissioner Gordon and even the Catwoman with straight-faced earnestness — presaging the career of Leslie Nielsen playing hilarious deadpan characters in Airplane! and the Naked Gun movies.  West was perfect for the Batman role, and that West was able to impassively act the part was particularly impressive when you consider that he was romping around in an embarrassingly tight superhero costume and cape.  It couldn’t have been easy being Batman, but West pulled it off — and even more remarkable, when you think about celebrities of the modern era who will do just about anything to get attention, he never dissed the show or made fun of it, even after the show had long since ended.  To the contrary, West seemed legitimately appreciative, at least publicly, that he had a chance to be a star and a hero to little kids during those long-ago days.

It’s unimaginable that a show like Batman would ever get made these days, because network executives would insist on complex characters struggling with inner demons and the violence would be much bloodier, and scarier, and deadlier, and Batman would never give Robin the kind of lectures that the Boy Wonder got back in the ’60s.  It’s understandable, I guess, but it’s too bad, too.  There’s something to be said for innocence, and a hero who thinks it’s important to mention dental hygiene now and then.

This afternoon I gave blood at the American Red Cross bloodmobile at the New Albany Farmer’s Market.  It was one of eight different mobile units that were out for blood in the central Ohio area today. 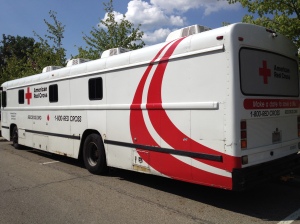 It’s the first time I’ve donated at a bloodmobile, as opposed to the set-up when the Red Cross comes to visit our law firm — and the whole time the voice in my head was saying, in its best Adam-West-as-Batman tones:  “To the bloodmobile!”

The principal difference between the bloodmobile and the standard set-up is the number of machines that are available.  Other than that, the process was the same.  There are four comfortable padded couches — two to a side — on which donors can recline while doing their civic duty, and the staff was friendly and professional.  All told, it took me about 40 minutes to verify my identity, answer the health questions, give blood, and then grab a water bottle and snack and head out the door to buy some cheese, preserves, and apple butter at the Farmer’s Market.

There’s always a need for blood., and giving is a good way to help your community and people in need.  If you’re at a place where the bloodmobile is visiting and you’ve got a few minutes to spare, your donation would be much appreciated!

Yesterday the original Batman, Adam West turned 82. The Batman Show aired back in the 60’s and Batman had a host of villians that he fought on a weekly basis. One of my favorites was the Mad Hatter where his hat pops open and a pair of eyes hypnotizes / paralyzes his prey.

Of course the show would culminate with a fight scene, Zlonk, Klonk, Kapow where Batman and Robin would prevail. This was classic television in the good old days. Sometimes I wish we could get those days back.