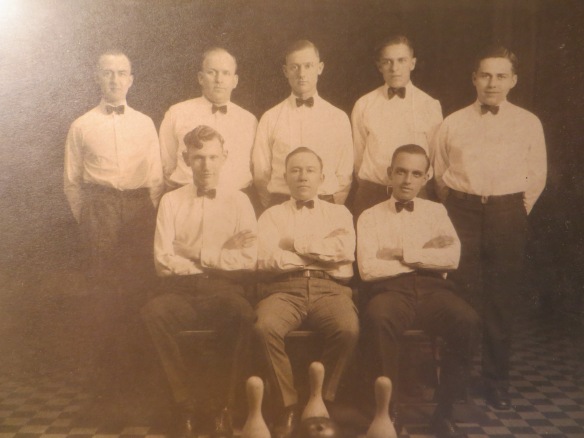 I ran across this classic photo recently and had to share it.  It’s a picture of Grandpa Neal’s bowling team, circa the mid-1920s.  That’s him in the middle of the back row — the slender, square-jawed fellow who still had some hair to part.

A pretty somber bunch, aren’t they, with their little bow ties, and long-sleeved, buttoned-up white shirts, and carefully shined shoes?  I doubt if they ever called a beer frame or engaged in any horseplay that might detract from their ability to pick up the ten pin.  Bowling was serious business in those days, when Akron was one of the centers of the bowling universe and dozens of teams competed for bragging rights in the Akron Masonic League.

Grandpa Neal loved bowling, and he participated in the Akron Masonic League for more than 60 years, until well into his 90s.