The talk about Hillary Clinton’s health episode has knocked Libertarian candidate Gary Johnson and his interview gaffe off the front pages.  He must be grateful for that.

If you’ve seen the footage of Johnson’s interview last week on MSNBC, you know it was a painful moment.  Johnson is asked what he would do about Aleppo, and he stares blankly at the interviewer and then asks “And what is Aleppo?”  The interviewer says, “you’re kidding,” and then explains that Aleppo is in Syria.  Of course, for years Aleppo has been a focus of the ongoing fighting in that war-torn country.

The footage is tough to watch, because you can almost see Johnson’s brain desperately spinning and trying to come up with an answer — but he can’t call up anything.  Johnson later explained that, at the moment, his mind was stuck on thinking that “Aleppo” was an acronym for something — he just couldn’t remember what.  After getting some air time on a national network, being asked questions that indicate he is being taken seriously as a viable candidate, and having a chance to reach voters who might actually consider voting for a third party in this unfortunate presidential contest, sheepishly asking “And what is Aleppo?” must have been as embarrassing as it gets for a politician.

It’s tough for the third party candidates in America.  It’s rare for them to be taken seriously, and rarer still for them to have any kind of impact on the race, because as Election Day nears and the reality of the polls sinks in, their supporters start wondering if they are wasting their votes.  For that reason, the margin of error for third party candidates is awfully small.  Whereas the major party candidates can survive a number of blunders — as Donald Trump’s amazingly resilient poll numbers indicate — when a bad gaffe like Gary Johnson’s Aleppo moment happens to a third-party candidate, it can be enough to quash their chances forever.

I’ve heard more people talking about the Libertarian candidate and the Green Party candidate this year than ever before, and some polls were showing Johnson was reaching the high single digits — putting him within striking distance of a showing sufficient to give him a podium at a presidential debate, which is the Holy Grail for third-party candidates.  Johnson says his “Aleppo day” might actually end up working in his favor, by increasing his name recognition and raising awareness of his candidacy.

Perhaps . . . but experience teaches it was more likely the death knell, and the moment when Johnson became the butt of a future Saturday Night Live skit.  As Johnson sat their under the TV lights, desperately struggling to think of what Aleppo was, he may have crossed the line into irrelevancy.

People have forgotten about Syria, but not because things have gotten better there.  Instead, Syria has simply been knocked off the front page by the French action in Mali, Lance Armstrong’s confession, and countless other, fresher stories. 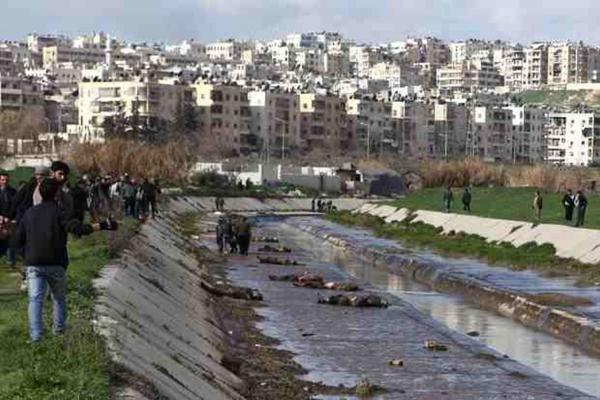 Yesterday, evidence emerged of another horrific mass killing in Syria.  More than 70 bodies were found by a river near the town of Aleppo; some had hands tied behind their backs and gun shot wounds to the head.  The UN estimates that more than 60,000 people have been killed in a conflict between the Assad government and opposition groups that has lasted for a year.  The opposition blames the government, and the government blames the opposition forces, and in the meantime Syrians keep getting slaughtered.

Predictably, the news of the latest massacre brought another call for international intervention and action by the UN Security Council.  There will be no UN action, of course, because the Security Council is deadlocked, with China and Russia resisting any action that might be taken against the Assad government.  Even the U.S., Great Britain, and France are just pushing for resolutions that threaten sanctions.  UN resolutions aren’t likely to do much good when armed men are kicking in your door and taking members of your family out for execution.

We’re paying no attention to it, but Syria should be teaching us two valuable lessons and reminding us of a third, sad reality of the modern world.  The first lesson is that the UN is a weak institution that will rarely take decisive action; contrast the French action in Mali to the UN’s dithering about Syria, and you get a good idea of the difference between a nation and an “international institution.”  The second lesson is that the cries of the “Arab street” about mistreatment of Arabs are hollow and hypocritical.  Where are the mass protests in front of Syrian embassies throughout the Arab world when each new outrage is unveiled?  We should all remember the lack of any meaningful Arab response to the murder of thousands of Syrians the next time we hear angry Arab denunciations of claimed Israeli misconduct toward the Palestinians or American unfairness.

And the cold, cruel reality is that the world has only so much appetite for horror and outrage before it turns off the TV.  The BBC story linked above refers to the “Syria crisis,” but that’s not quite right.  A true “crisis” involves a crucial point of decision.  That doesn’t exist here, because the world seems to have accepted that the Assad regime will remain in power and continue to kill its opponents.  If there were a policeman in front of the yellow tape surrounding the Syrian crime scene, he would be saying:  “There’s nothing to see here.  Move along.”