As we commemorate the 50th anniversary of the Apollo 11 landing on the Moon — which happened on July 20, 1969 — we’ve seen a lot of interesting articles about the space program, the Apollo program, and NASA’s lunar missions, including a fascinating Smithsonian article about Apollo 11 specifically.  Popular Mechanics also has reprinted an interview with Buzz Aldrin from 25 years ago about why he went to the Moon, and why he thinks we should go back. 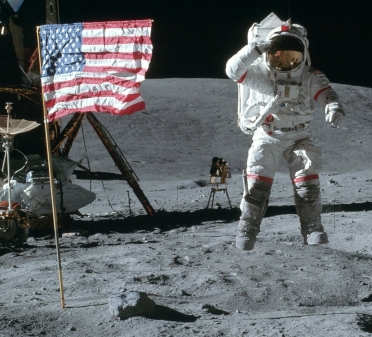 One of the most intriguing pieces I’ve seen was a UPI article that sought to identify products and technologies that can be attributed to the Apollo program and that still are in use today.  (That means that “Space Food Sticks,” an awful-tasting product from my youth that quickly went out of production, doesn’t qualify.)  The UPI writer found that Apollo’s legacy goes beyond Tang, velcro, and computer chips.  Products such as the “Dustbuster” hand-held vacuum cleaner, high-performance athletic shoes, communications headsets, credit card swiping machines, and even the “memory foam” in your mattress all trace their roots back to developments that occurred during the Apollo program.

These technological advances are important, of course, and show what can happen when you hire a bunch of really smart, creative, highly motivated engineers and problem-solvers, give them a mission and adequate funding, and establish a meaningful deadline to achieve the goal.  Technological developments are a pretty predictable result of such an effort, which is one reason why I think the United States should end the 50-year drought and get back into the manned space arena in a significant way — whether through government programs, or through partnership with the private companies that are focused on space, or through some other creative means.

But new technology and techniques are not, perhaps, the best reason to go back into space.  For those of us who grew up during the ’60s space program days, and dreamed about being an astronaut like the courageous adventurers of our youth, there will always be a part of our make-up that is interested in space, and science, and the stars.  Perhaps it would be impossible to fully recreate the conditions that made the early astronauts celebrity-heroes in those innocent days, but wouldn’t it nevertheless be valuable to give the current generation of young people role models who are smart, well-educated, selfless, and brave, and encourage those young people to dream about discovery and scientific advancement?

The technological legacy of the Apollo program is impressive, but I think the real legacy is aspirational — something that touched us deeply and leaves even 60-somethings like me still keenly interested in space and hoping that one day, perhaps, I’ll follow in Neil Armstrong’s footsteps and be able to visit the Moon.  The real legacy tells you something about the power of a dream.  We should give the children of today, and tomorrow, the chance to experience such dreams again.

Forty-nine years ago, on July 20, 1969, the Lunar Module carrying Neil Armstrong and Buzz Aldrin landed on the Moon.  Neil Armstrong stepped off a ladder onto the lunar surface, spoke his famous words — “That’s one small step for [a] man, one giant leap for mankind” — and history was made.

I was watching on that day, along with probably everyone else on the planet who had access to a TV set.  I remember sitting with UJ and watching grainy black and white footage as the lunar module landed and then, later, Armstrong stepped into history.  I was 12 years old.  Even now, I still feel a little thrill just thinking about that day and that moment, when it seemed like anything was possible and it would be the start of a golden age of space exploration that would take human beings to Moon bases, Martian colonies, and on to the stars.  Of course, that didn’t happen . . . but I still remember that awed and awesome feeling.

Popular Mechanics has a great piece that steps through the various phases of the Apollo 11 mission, from liftoff to the descent to the Moon to the return to Earth, based on the recollections of some of the participants.  It’s well worth reading.  If, like me, you watched it live in amazed wonder, you can relive that experience.  If you weren’t around then, it’s worth reading just to get a sense of what it was like for the United States of America to invent spacecraft, land on the Moon, and return to Earth in an era when the most sophisticated computer used on the mission would now be considered a Stone Age relic.  It was an extraordinary achievement.

I hope our politicians celebrate this 49th anniversary, and finally decide that it’s high time that we return to the Moon — and venture farther still.  It’s long overdue.

Neil Armstrong has died.  He was a native Ohioan, a fine fighter pilot, a Korean War veteran, a successful businessman — but he will forever be remembered as the first man to set foot on the Moon.

On July 20, 1969, millions of people around the world watched with hope and anticipation as Armstrong backed down the ladder of the Eagle landing craft, moving slowly in his bulky white space suit adorned with an American flag.  When he finally put his boot print on the lunar surface — and made his famous, crackly statement, “That’s one small step for man . . . one giant leap for mankind” — every American felt a huge rush of national pride.

It was a magnificent achievement, and Armstrong’s humble, moving words captured the moment, and the emotions, perfectly.  Those of us who watched that grainy broadcast live will never forget it.  The fact that Armstrong was an Ohioan just made the moment a little sweeter.

Neil Armstrong’s legacy cannot be separated from Apollo 11, its historic lunar landing, and the boot print he left on the Moon’s dusty surface, but he was an interesting, and estimable, person for other reasons.  A private person, Armstrong never tried to cash in on his fame or take advantage of the circumstances that made him the first man on the Moon.  When he returned from the lunar surface he worked for NASA, taught engineering at the University of Cincinnati,  served on corporate boards and investigatory commissions, and spoke out in favor of space exploration — and he did it all without fanfare.

Neil Armstrong was 82.  He will be missed.