Sports fans know intuitively that concepts like karma are vitally important to the outcomes of key games.  Whether you are at the game or watching at home, life gives you little clues about whether things are going to go smoothly and whether the ball is going to bounce favorably . . . or not.  Most fans are superstitious because of this inner awareness — if they wear the same shirt and follow the same routine, they are less likely to invite occurrences that indicate that the balance is tilted against them.

On my trip to Dallas, the little signs were everywhere, and I was keenly sensitive to them.

The trip got off on a wrong foot when my flight to Atlanta was delayed and it looked like I would inevitably miss my connection to Oklahoma City, but I somehow made it anyway.  I drove from Oklahoma City to Dallas without mechanical problems, bad traffic, or speeding tickets.  Thanks to the Friendly Flynns, we had a great place to stay and a great Game Day southern breakfast.  We found a perfect parking spot at AT&T Stadium, enjoyed a laugh-filled lunch with buddies from Cleveland, and did some tailgating with an old friend at a location where there were some hilarious signs and antics by excited ticket holders.  And somehow, in the crush of humanity, we randomly ran into colleagues at one of many temporary souvenir shops set up in a tent along one of the roads around the stadium.

And then, when I finally sat my wind-chilled bones in my seat high in the upper deck of the House that Jerry Built, the first image I saw on the enormous Jumbotron above the field was a sweater vest-clad Jim Tressel, a great coach and even better man who was present at the game because he was being elected to the College Football Hall of Fame.  With the comforting presence of Coach Tressel hovering over the field, how could the Ohio State Buckeyes possibly lose?  And, of course, they didn’t.

It’s nice to go into an important game with good karma, and it’s even better when that good karma produces the desired result.  The fates were with us.

There was a crush of humanity coming into AT&T Stadium when the gates opened. A lot of it was excitement to get the game face on, but there also was a desire to get away from the cold and a biting wind. 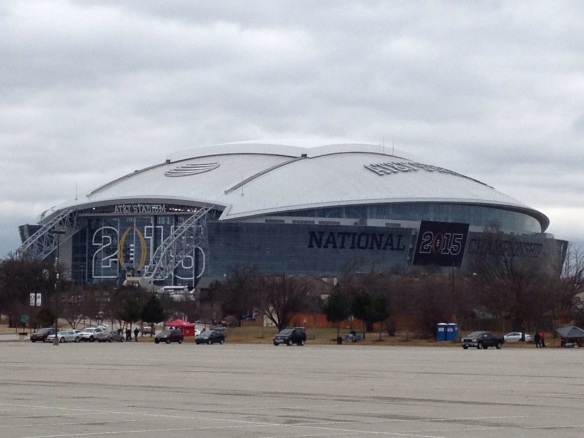 We came early, to beat the rush. The stadium awaits. But first, some tailgating and mingling with fellow members of Buckeye Nation.

Well, it’s Game Day. Oregon Ducks and Ohio State Buckeyes fans have descended on Dallas in force. Last night at dinner there were school colors everywhere in evidence and some friendly bantering between supporters of the two universities.

In addition to anticipation of the game itself, there’s also curiosity and questions about the venue. AT&T Stadium is supposed to be a lavish monument to Texas football. But, where to park? Are there places to eat nearby? How bad will the traffic be? When should we head to Arlington?

Kish calls me the uptight traveler, and she’s right — I like to get to places early. In this case, getting to the game site early not only seems prudent, but it also will allow us to enjoy the pomp and pageantry and building excitement of the very first college football National Championship Game.