Some time ago I wrote about Richard’s and my chance encounter with an unusual musical ensemble during a visit to the Luxembourg Gardens in Paris on a fine Sunday morning.  A fellow citizen of the internet, artisanuk, happened to be at the Luxembourg Gardens to hear the ensemble that morning.  artisanuk later found my blog posting on the performance and asked whether I knew the name of the group.  Alas, I did not. 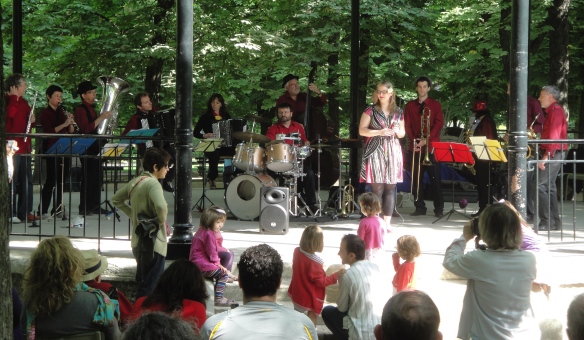 Now artisanuk, whose internet sleuthing ability obviously far exceeds mine, has discovered that the name of the group is FAZ and also has located their myspace page, which includes video clips and recordings of FAZ performances.  To make it even better, one of the FAZ performances is of a song the group played when we saw them at Luxembourg Gardens.  If you are interested in hearing music that is a little offbeat, I encourage you to follow the link above and give one of their songs a listen.

Thanks, artisanuk!  Courtesy of your hard work, I not only know the name of the ensemble, I also now know that what I was calling the Austin Powers theme song is really named Soul Bossa and was written by Quincy Jones.

So, through the power of the internet, interested onlookers satisfy their curiosity and the music of an obscure ensemble may reach a slightly wider audience of people half a world away.  That kind of collective linking is what the internet is all about.