There are a lot of reasons why it would be fun to have a tropical home.  One of them is being able to paint your house just about any color in the rainbow and not have your neighbors complain about it.  Imagine — an ochre house, or a salmon one, or a fine mint green.  No need to stick to the boring whites and off-whites and grays; your palette is limited only by your imagination. 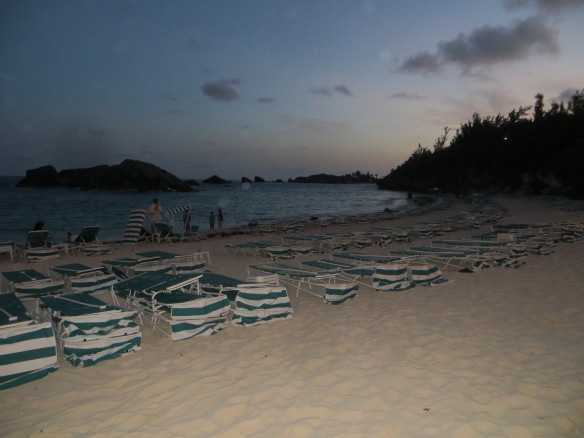 It’s a pretty time of day.

Sometimes, on a tropical isle, it’s hard to tell the difference.  On a blazing day in Bermuda, the brilliant sand and the bright waters seem to meld together seamlessly, with subtle shifts in hue and no clear line of demarcation.

We’re in Bermuda for meetings, staying at the Fairmont Southampton.  Bermuda is a quaint, charming island, surrounded by some beautiful water.  We have a pretty view from our hotel room window, too.

We’ve been here before with this group, so our trip has a nice element of familiarity to it.  Time for a Dark and Stormy!  (For those of you who question whether it is cocktail hour, remember that Bermuda is an hour ahead of Eastern time.)

A final point about our recent visit to Bermuda:  it seems like every time you visit a tropical location, there is a new cocktail that people are drinking.  In Bermuda last week the overwhelming cocktail of choice was called a Dark and Stormy.

The Dark and Stormy is made in a tall glass with plenty of ice, a shot, more or less, of Gosling’s Black Seal rum, enough ginger beer to fill the glass to the top, and a lime wedge for garnish.  (Apparently the ginger beer of choice is Barrit’s ginger beer.)

The result is much darker than the standard tropical drinks, which tend to have lighter pastel colors.  Nevertheless, Kish and a host of others at the conference we were attending found the Dark and Stormy to be a very tasty and refreshing drink on a sultry evening.  I’m not sure any grocery stores sell Barrit’s, or any kind of ginger beer, here in Columbus, but we will be keeping an eye out for it. 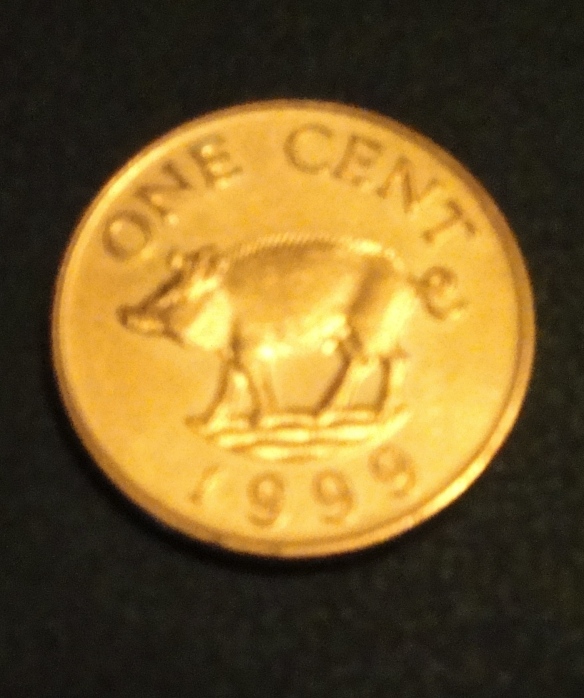 When Kish and I were in Bermuda we bought a soda, paid cash, and received some Bermuda coinage as change.  I took a look at the coins and was surprised to find that the bright copper Bermuda penny has the familiar likeness of Queen Elizabeth sporting a crown on one side and a hog on the other.

What’s up with that?  Why would a tony island like Bermuda, with its lovely “pink sand” beaches, iconic Bermuda shorts and knee socks, ubiquitous scooters, and proud British colonial heritage, feature a pig so prominently on its legal tender?

It turns out that hogs have a long and distinguished connection with Bermuda.  A sea voyager who was an early visitor to the Bermuda Triangle was shipwrecked with some live hogs in the hold.  The hogs made it to shore and, in a few years, their grunting, squealing descendants had spread throughout the island.  The hogs were so prolific that some who visited Bermuda came to know it as “Hogge Island.”  (Changing that name undoubtedly helped spur Bermuda’s tourism industry, by the way.)  Naturally, then, the first coins minted on Bermuda featured a hog on one side.  The current penny is a tribute to that initial coinage.

The eagle is our natural bird, of course, and it looks noble on our currency.  Canada’s coins properly feature the likes of the beaver and the maple leaf.  Given its important role in Bermuda’s history, the humble hog therefore is properly honored with a prominent place on the Bermuda one-cent piece.  You have to give the Queen credit for being willing to share a coin with a curly-tailed swine of the four-legged variety.  The people of Bermuda also seem proud of their hog penny.  Indeed, one of the most popular pubs in Hamilton is the Hog Penny Pub.

Kish and I were in Bermuda last week on a business trip and had a very enjoyable time during our brief visit.  We stayed at the Fairmont Southampton, which is the biggest hotel on the island. It is located on a promontory with a commanding view of the ocean in one direction and a sweeping bay in the other.  Others obviously recognized the value of the location from a lookout standpoint; the Gibbs Hill Lighthouse, built in 1844, is a short walk away from the hotel.

The colorful waters of the Bermuda shore line

Bermuda is known for its beaches, and for good reason.  We spent some time on Horseshoe Beach and the neighboring Fairmont Southampton beach, both of which are beautiful.  The sand is light and fine, striking rock formations jut from the shoreline, and the water is highly colorful — brilliant blue in the distance, a bright blue-green near the shore line, and a palette of colors in between depending on the depth of the water.  The bright color of the water stands in sharp contrast to the dark rock that rises quickly from the shore line.  Roads are carved into the rock, making the entire island seem like the careful handiwork of a master sculptor. 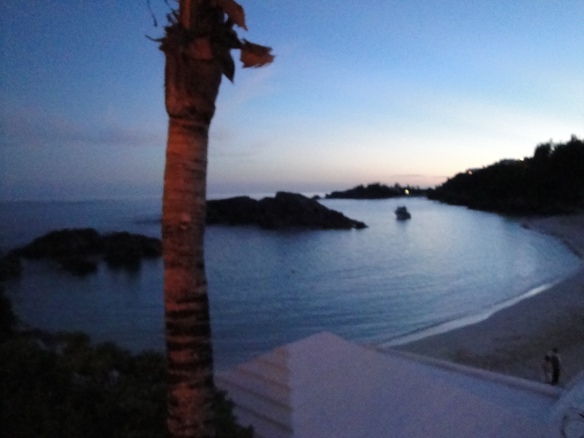 The view from our table at the Ocean Club

During our trip, we had some excellent meals.  I highly recommend the Waterlot Inn and The Reefs, both of which are within easy walking distance of the hotel, and we had a wonderful outdoor meal under the stars at the Ocean Club, which is located above the hotel’s private beach.  Don’t miss the Bermuda chowder, which is a dark, hearty, highly flavorful concoction infused with rum and pepper sauce.  We also visited Hamilton, one of the larger towns on the island.  It offers some beautiful vistas, with storefronts and seaside restaurants painted in soft pinks and yellows.  When you see those colors you know that you are in the tropics.