In most cities, if you want to ride your bike to work, you’ve got few options.  You can carry your bike to your office, if your boss permits it.  Or you can lock your bike to a bike rack, or a tree, and leave it exposed to the elements — and the tender mercies of any mean-spirited, thieving passerby who might want to steal a tire, or cut your bike chain with boltcutters, or leave your bike a twisted hunk of metal just because they happen to be in an unsociable mood. 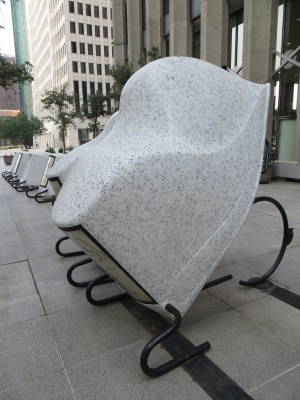 Today in Houston I saw something I’ve never seen before in the urban bicycle security area.  Apparently installed by the Houston Department of Public Works and Engineering, it’s called Bikelid.  It consists of a metal frame against which you put your bike, and a fiberglass canopy that descends to cover your bicycle to a point about an inch from the ground.  You then lock the fiberglass canopy against the metal frame.  Your bike stays snug and secure under the fiberglass cover until you come to pedal it away.

There were about a dozen of the Bikelid devices in front of one of the high-rises I passed by today, and almost all of them appeared to be in use.  Seems like a pretty good idea to me.  If we want to encourage bicycle commuters, we need to give them a place to store their bikes while they are working.  Bikes are costly investments these days, and people aren’t going to take the risk of cycling to work unless they’ve got a secure area to put their bikes.  And while the Bikelids aren’t the most attractive additions to the municipal landscape, they aren’t nearly as ugly — or as dispiriting — as a bike that has been vandalized.