Yesterday was Demolition Derby Day at the Blue Hill Fair.  Having never been to a demolition derby before, we had to go — and we’re glad we did.

A few thoughts about demolition derbies.  First, they’re popular.  At the Blue Hill Fair, the demolition derby is one of the hottest events going.  We had to wait in a long line for our tickets, and 800 avid demolition buffs ultimately crammed the grandstands to watch already ramshackle cars bash into each other until the steam started spouting, parts were flying, hoods and axles were ripped from their vehicles, and the cars could move no more.  Second, they involve very robust warning signage at the entrances.  We were cautioned that the grandstands could be pelted with flying bits of metal, clods of dirt, and other debris that could cause serious injury and advised that we were accepting the risk by attending.  Of course, this warning deterred absolutely no one, and little kids were among the fans watching the carnage.  And third, a demolition derby seems like a classically American way to dispose of old cars.  Forget about Cash for Clunkers — demolition derbies combine the American taste for waste and violence and clearly are the best way to get rid of the rambling wrecks on the Great American Road.

If you’ve never been to a demolition derby, the rules are simple.  The cars — which have been thoughtfully stripped of all glass windows, headlights, taillights, radiators, and other parts that might go flying into the stands or slice the competitors to ribbons — start at opposite ends of a dirt track directly in front of the spectators that is bounded by concrete barriers.  After the crowd counts down, the vehicles then proceed to ram into each other, with rear-end collisions being the preferred method, until only one car is able to move.  The only rule is that the cars can’t target the driver’s side doors of the other cars in the derby.  The bloodlust quickly came out in the crowd (myself included) and we cheered lustily for the best collisions and the drivers who kept ramming even when their cars were beat to hell.  My favorite was the #17 car pictured below, which kept at it even after its wheels were bent and virtually every piece of metal on the frame had been ripped off or pounded into scrap.  Alas, gutty #17 was reduced to immobility by a huge hit and couldn’t finish, but when the derby was ended the driver received an ovation from the grateful crowd.  His vehicle was then towed or carted off the track, along with virtually every other participant in the derby.

I didn’t think I would like a demolition derby, but it was a riot.  What’s next?  I’m thinking giant tractor pulling contests and monster truck rallies.

Yesterday we ventured over to the Blue Hill Fair in Blue Hill, Maine.  It’s a big deal locally, and we paid a visit to get our taste of small town America.  The Blue Hill Fair has everything you’d expect to see in a local fair, from livestock and quilting and produce contests — like the impressive array of bright green vegetables shown above — as well as the kind of vomit-inducing rides that you remember from the fairs you went to in your childhood.  Who doesn’t recall their first ride on the Tilt-A-Whirl?  (And for that matter, isn’t it hard to believe that Tilt-A-Whirls are still out there, motoring away and causing people to go careening from one side of the ride to the other?)  The Scrambler was there, too, but no sign of the notorious Rotor.

We also watched a fine performance by the Red Trouser Show, put on by two long-time friends who now make their living traveling the circuit and performing at fairs and functions across the globe.  These guys were great, both in terms of their juggling, tumbling, and acrobatic efforts and in their witty banter and ability to get the crowd into the show.  It was a great reminder of America’s vaudeville past and how a simple performance by two people equipped with flaming torches and a ladder can create a memorable experience.

In addition to the elements of your basic small town fair, however, the Blue Hill Fair has something extra.  Because author E.B. White spent a lot of time in this part of Maine, the local lore is that the fair that is a key part of the story of Wilbur the pig in Charlotte’s Web is based on the Blue Hill Fair.  As a result, near the livestock exhibitions you can find a little pen with a dozing pig — two of them, in fact — sporting a blue ribbon because they are “some pig.”  No sign of Charlotte or her web, however. 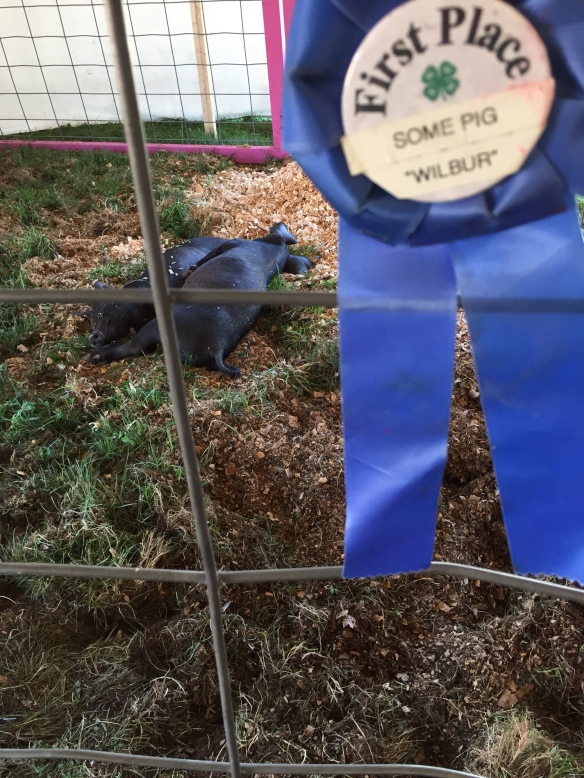 And those of you who remember the story in Charlotte’s Web will recall that the wily Charlotte enticed Templeton, the rat, to accompany Charlotte and Wilbur to the fair by promising him gluttony beyond compare due to the food available along the midway.  If Templeton had been at this year’s Blue Hill Fair, he would have been a happy camper — you could find every imaginable kind of fair food there, from fried dough to funnel cakes to cotton candy, caramel apples, and bacon-wrapped hot dogs.