Yesterday the Browns Backers of Westerville took their annual bus trip up to Cleveland to see the Browns play the Bengals. The weather was a gorgeous seventy two degrees with wind gusts of up to forty miles per hour. 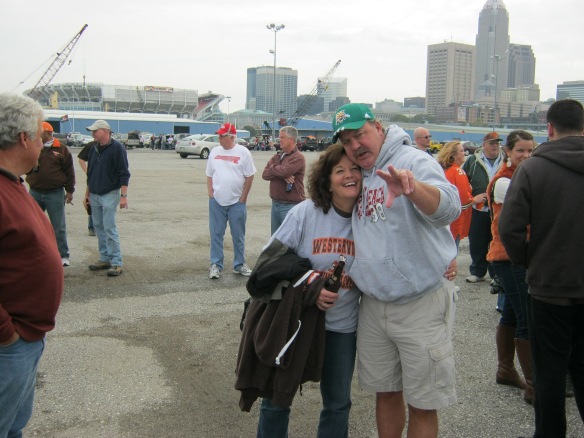 By my count there was only one Bengal fan on our bus – Karen’s husband Tim who wore Ohio University garb because he didn’t want to call attention to himself.

Westerville Browns Backers (we meet every Sunday at Jimmy V’s Bar and Grill) President Steve Hodge manned the grill which included the standard brats and burgers along with macaroni salad, potato salad and for desert, of course BROWNIES.

We had a great view of the field even though our seats were way up in the end zone which left some of us breathless, no pun intended.

Rita, Karen and I were happy as can be when the Browns broke the game open in second half and brought home a 34 – 24 win.

The highlight of my day was using the complimentary ticket given to each of us Browns backers for a free soda and hot dog. Can’t beat that stadium mustard.

So thankfully we Browns fans no one thing is for sure, we are not going to be winless this year – wooo hoooo !

Today the Cleveland Browns won a game they absolutely had to win.  By the end of the season this game may mean nothing — but at least a win in a must-win game is a welcome change from prior seasons.

The Browns beat the Indianapolis Colts, 27-19.  It’s not a great achievement, because the Colts without Peyton Manning are like a mighty aircraft carrier without a captain.  Nevertheless, any win on the road in the NFL is a win to be celebrated.  For the Browns in particular, the game is worth relishing because the Browns actually managed to hold onto, and then expand, a fourth-quarter lead and put the game away.  Peyton Hillis’ hard-running 24-yard touchdown gallop gave the Browns a two-score lead, and the defense’s forcing a fumble from Kerry Collins on the next series was the back-breaker.

The Browns have a long way to go, but winning to keep pace with the other teams in the AFC North was crucial.  Today’s game also showed some promising signs.  For the first time since Kamerion Wimbley’s rookie season, the Browns may have an defensive line that can consistently pressure the opposing quarterback without blitzing.  I particularly like the hustling, never-say-quit play of rookie lineman Jabaal Sheard.  Colt McCoy had a reasonably good day throwing the ball, which is essential if you are going to run the West Coast offense.  And the Browns continued to stick with the rushing game, wearing the Colts down until Hillis sprang his clutch run.

This win is a baby step, but it is a baby step in the right direction after last week’s embarrassing performance against the Bengals.