Back in the days when the firm unwisely allowed me to interview law students, I would occasionally ask what they hoped they would do with their practice.  Some of the fresh-faced, dewy-eyed students responded, with complete sincerity:  “I’d really like to travel.”  It was all I could do to avoid bursting into laughter at their ludicrous naivete. 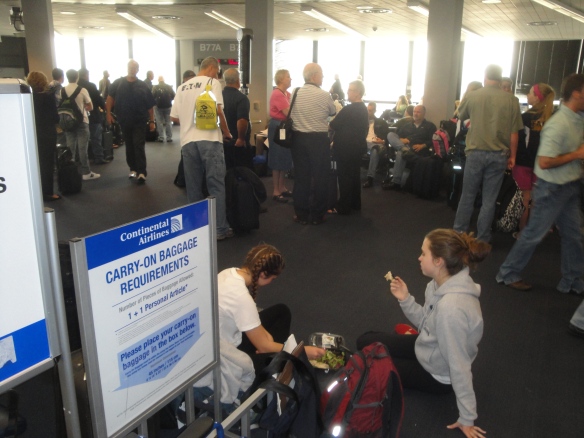 Here is the scene that confronted us at Gate B77 at Bush International Airport in Houston this afternoon.  Gate B77 is in one of those infernal pod areas, where about 8 gates are crammed into a circular area.  The boarding area was packed with people and their carry-on luggage.  Clusters of people were standing in the open areas, blocking easy passage.  People were sitting on the floor, eating their fast food.  In the distance a kid was screaming.  At one point, a man walked by, carrying a live chicken under one arm and leading a goat.

Okay, I made that last part up, but the noisy, trashy, chaotic scene made me think of what the debarkation area at Ellis Island must have been like.

This, then, is the glamour of business travel!