In 1971, our family moved from Akron to Columbus.  We left behind the world of Cleveland TV personalities, like Barnaby and Captain Penny, and moved into the orbit of Cincinnati TV shows that were carried on Columbus stations.  One of the Cincinnati shows was a silly daytime variety show called The Paul Dixon Show.

Paul Dixon was an older man who appeared to wear an obvious toupee.  I’m not sure whether he had any special talent, but he had been hosting his show for years and was a celebrity in the Cincinnati area.  One of his trademark segments was to attach a “knee tickler” — a kind of dangling ornament — to the hems of the dresses of the housewives who made up the studio audience for his show.  Campy music would play, Paul Dixon would make a few lascivious facial expressions at the camera, and then he would demurely attach the “knee tickler” to the one-piece, just above the knee mini-dress of a stocky middle-aged woman with a beehive hairdo.  This routine was viewed as “naughty,” edgy, just barely acceptable stuff in the world of daytime TV in the early ’70s.

It was a more innocent time then.  I thought of The Paul Dixon Show recently when I saw a grown man wearing a t-shirt that had a depiction of a hand giving the finger and used the “f”-word, spelled out in bold letters.  He was at a sporting event where lots of people, including kids, were in attendance.  He obviously thought it was hilarious stuff, but for me it epitomized the increasingly vulgarity and crassness of our popular culture.  We’ve gone from times where putting a “knee tickler” on a woman’s dress pushed the envelope to the point where the queen mother of curses is casually displayed on clothing worn at a public event.

I don’t yearn for a return to Victorian sensibilities, but I regret the direction in which we are heading.  If we’ve reached the point where obscene t-shirts are an accepted part of popular culture, what’s the next stop in our downward spiral?

As great as Ghoulardi and Barnaby and Captain Penny were, no recollection of Cleveland TV personalities of the ’60s would be complete without some comment about Dorothy Fuldheim.

Dorothy Fuldheim was a legend of Cleveland television.  By the late 1960s, she had already been the undisputed leader of Cleveland TV newscasting and commentary for 20 years.  She had interviewed major historical and cultural figures, from Adolf Hitler to John Kennedy to Muhammad Ali, and even though she was well into her 70s she gave a nightly commentary on what was going on in the world. And she continued to do so long after our family moved from Akron to Columbus and left the Cleveland broadcast area.  Fuldheim did not retire until 1984, at age 91.  She died five years later.

As a kid watching those broadcasts, I never gave a thought to the fact that Dorothy Fuldheim was female and a true trailblazer for women broadcasters.  She was just Dorothy Fuldheim, on the air as she always was, giving her opinions with an absolute, unquestioned air of conviction and authenticity.  It was obvious that she meant everything she said; she was Dorothy Fuldheim and didn’t need to cowtow to anyone.  And her voice!  There was a depth and genuineness to it.  It was like the voice of the whole Midwest, coming from this one red-haired woman sitting behind the desk.  It is no wonder that her career lasted as long as it did.

The YouTube clip below, in which Dorothy Fuldheim commemorates her 86th birthday, is a good example of her unique talents.

For a little boy growing up in the Cleveland, Ohio television market during the early 1960s, there were two must-see TV shows:  Captain Penny and Barnaby.  Oh sure, there was Romper Room with Miss Barbara, but no self-respecting kid over the age of 3 who had figured out how to change the channel on the TV would watch it — although to this day I can still remember “Bend and stretch, reach for the stars . . . .  There goes Jupiter, here comes Mars . . . . ” But I digress.

Both Captain Penny and Barnaby were characters who read viewer mail, showed cartoons, and had their own catch phrases.  Captain Penny was a railroad engineer.  I’m not sure why he was called Captain — the title was as mysterious as that of the land-bound Captain von Trapp from The Sound of Music.  He showed the Little Rascals and the Three Stooges, told you about dogs that could be adopted from the kennel in a segment called Pooch Parade, and encouraged you to eat your vegetables.  At the end of every show, he told the impressionable rug rats who were watching to always remember:  “You can fool all of the people some of the time and some of the people all of the time, but you can’t fool Mom.”  The Mothers’ Lobby no doubt appreciated Captain Penny’s ringing endorsement — and also appreciated that Captain Penny was a very effective babysitter. 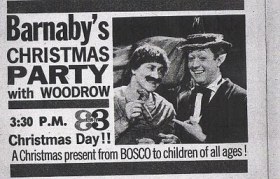 Barnaby was harder to figure out.  He lived in the Enchanted Forest, and the show’s theme music was dreamy-sounding flute music.  Barnaby apparently was an elf, because he had pointed, Spock-like ears.  But he was fully grown and dressed like a character from The Great Gatsby.  This nattily attired sprite typically wore a blue double-breasted blazer, a kind of ascot, and a straw boater, as if the elves in the Enchanted Forest had emigrated from Newport, Rhode Island and still preferred their yachting wear.  Barnaby’s friend, Woodrow the Woodsman, was a somewhat dim-witted rustic who wore a leather jerkin.  Barnaby obviously was a gentle soul.  He called you “neighbor” and told you what a special person who were.  He also showed lots of Popeye cartoons, so after you would watch Popeye beat the snot out of Bluto and yoke him to a gigantic spinach-planting machine you’d get Barnaby’s sensitive act.  The message of the Barnaby show therefore was a bit mixed.

Is there even local TV programming for kids anymore?  If, as I suspect, there isn’t, that’s really a shame.  UJ, Cath and I loved to watch these shows.