Dad’s favorite actor was Humphrey Bogart.  I don’t think anyone else was even a close second.  And his two favorite movies — both of which featured Bogie, of course — were Casablanca and The African Queen.  So when Kish and I went with friends to see Casablanca to kick off the Ohio Theater Summer Movie Series last night, at the bargain ticket price of only 50 cents a person, of course I thought about Dad.

It turns out Dad had pretty good taste in movies.  Casablanca is generally considered one of the very best movies ever made, and if you get a chance to see it on the big screen, you shouldn’t pass it up.  The tale of star-crossed lovers set in exotic, desperate Casablanca, with the grim early days of World War II as its backdrop, is a terrific, timeless classic that is filled with memorable lines and characters, from Dooley Wilson’s warm and decent Sam to Sidney Greenstreet’s fly-swatting Ferrari to Paul Henreid’s impossibly noble Victor Laszlo.  The chemistry between Bogart and Ingrid Bergman’s Isla Lund crackles and almost jumps off the screen, and stands in sharp comparison to many of the modern romance movies where the “chemistry” is either forced or totally lacking.  And Bogart’s depiction of Rick — the tough, fearless, gravel-voiced American who will stick his neck out for nobody, but turns out to have a conscience and a heart of gold — has become so iconic we tend to take for granted what a fantastic acting performance it was.  Watching the scenes where the anguished Rick is drinking to try to forget the painful wound that Ilsa has reopened should be required study for anybody who wants to become an actor.

One other thing about Casablanca that you notice in comparison to today’s Hollywood fare:  it somehow manages to combine a compelling personal narrative that grabs you by the collar, and real potential peril from believable villains, with great humor.  Claude Rains as Louis, the jocular Prefect of Police, gets most of the laugh lines, but Bogart has some and other characters do, too.  How many modern films can you think of that successfully feature drama and humor side by side — or even try to do so?  It’s one big reason why Casablanca typically ranks right up there on the GOAT lists.

When you go up to a bar to order a drink, you want to project a certain nonchalant yet decisive elegance with the bartender that shows her that you’ve been here before and you know what you’re doing. 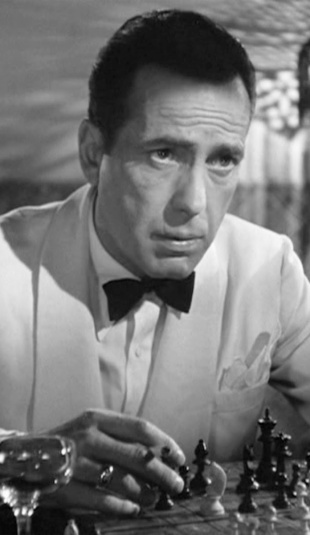 The goal is steely-eyed, white-jacketed, Humphrey Bogart in Casablanca-like cool certainty, as opposed to waffling or floundering or acting like goofy Clarence the Angel ordering a flaming rum punch at Nick’s, the hard-drinking bar in the alternative, George Bailey-free universe.

Knowing how to correctly pronounce the drink you’re ordering sure helps.

Would you know how to order a caipirinha, which the national drink of Brazil?  Made with sugarcane distilled spirits called Cachaca, lime, and sugar, it packs a lethal punch and is pronounced kai-pee-reen-ya.  Or let’s suppose you were up in Sweden during its endless, dark winter and wanted to warm yourself with a glass of traditional mulled wine, called glogg (with an umlaut over the o, too).  Appropriately, it’s pronounced glug, which should be easy to remember after you’ve swilled down two or three of them, because Swedish mulled wine tends to have a lot more alcohol than the American version.  Or let’s say you’re in a somewhat daintier mood, and feel like having a sgroppino to top off your meal.  That’s an Italian concoction of Prosecco, vodka, and lemon sorbet that’s pronounced sro-pee-no.  (You wouldn’t want to order that one at Nick’s, by the way.)

Hospitality Training Solutions has provided a guide to the correct pronunciation of these and other cocktails, to ensure that you project an image more like Bogie and less like Clarence the next time you belly up to the bar.  And remember, too — people rarely mispronounce beer.