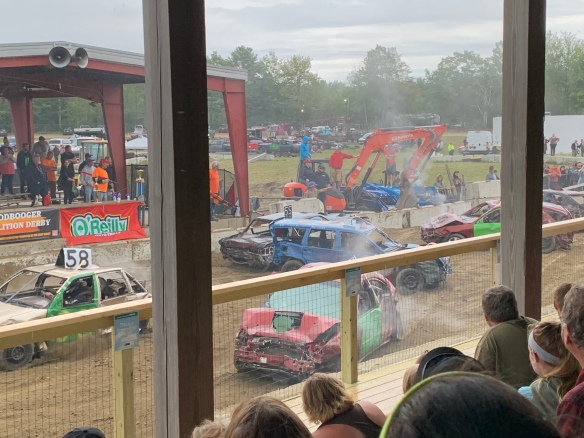 Yesterday was Demolition Derby Day at the Blue Hill Fair.  Having never been to a demolition derby before, we had to go — and we’re glad we did. 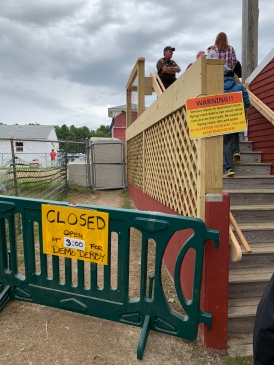 A few thoughts about demolition derbies.  First, they’re popular.  At the Blue Hill Fair, the demolition derby is one of the hottest events going.  We had to wait in a long line for our tickets, and 800 avid demolition buffs ultimately crammed the grandstands to watch already ramshackle cars bash into each other until the steam started spouting, parts were flying, hoods and axles were ripped from their vehicles, and the cars could move no more.  Second, they involve very robust warning signage at the entrances.  We were cautioned that the grandstands could be pelted with flying bits of metal, clods of dirt, and other debris that could cause serious injury and advised that we were accepting the risk by attending.  Of course, this warning deterred absolutely no one, and little kids were among the fans watching the carnage.  And third, a demolition derby seems like a classically American way to dispose of old cars.  Forget about Cash for Clunkers — demolition derbies combine the American taste for waste and violence and clearly are the best way to get rid of the rambling wrecks on the Great American Road.

If you’ve never been to a demolition derby, the rules are simple.  The cars — which have been thoughtfully stripped of all glass windows, headlights, taillights, radiators, and other parts that might go flying into the stands or slice the competitors to ribbons — start at opposite ends of a dirt track directly in front of the spectators that is bounded by concrete barriers.  After the crowd counts down, the vehicles then proceed to ram into each other, with rear-end collisions being the preferred method, until only one car is able to move.  The only rule is that the cars can’t target the driver’s side doors of the other cars in the derby.  The bloodlust quickly came out in the crowd (myself included) and we cheered lustily for the best collisions and the drivers who kept ramming even when their cars were beat to hell.  My favorite was the #17 car pictured below, which kept at it even after its wheels were bent and virtually every piece of metal on the frame had been ripped off or pounded into scrap.  Alas, gutty #17 was reduced to immobility by a huge hit and couldn’t finish, but when the derby was ended the driver received an ovation from the grateful crowd.  His vehicle was then towed or carted off the track, along with virtually every other participant in the derby.

I didn’t think I would like a demolition derby, but it was a riot.  What’s next?  I’m thinking giant tractor pulling contests and monster truck rallies. 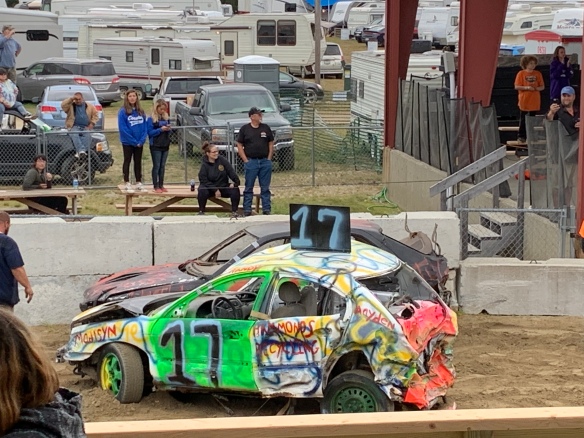 The Obama Administration and the Democratic Party have decided that the 2010 election should be about “choice.” That is, the President and his Democratic comrades don’t want to have the election be a referendum on how the country is currently doing under their stewardship.  Therefore, their goal is to make this election about “choice,” and they define the choice as being between the current policies and the “failed policies of the past” when Republicans controlled the White House and the Congress.  President Obama says it is like disciplining a teenage driver who has just driven the family car into a ditch and now says he wants to get behind the wheel again. 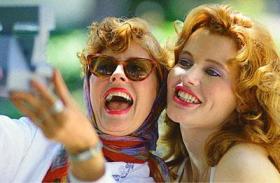 For a person who speaks often about rejecting “false choices,” the President and the Democratic Party seem to be presenting voters with precisely that.  No one is arguing that we should go back to the days when Republicans in control of Congress spent like drunken sailors.  If that were really the choice, most Americans would be suicidal, because the choice would be between the failed policies of the past and the failed policies of the present.  I think many Americans, whether the Democrats admit it or not, recognize that the economic policies of the Obama Administration have failed.

As bad as the economy was at the end of the Bush Administration, the record of President Obama and his supporters doesn’t exactly shine by comparison.  The President has presided over a sustained spike in the unemployment rate, a lingering recession that is teetering on the brink of the dreaded “double-dip,” a pork-laden “stimulus” bill that failed of its essential purpose of providing jobs and has saddled our children with unnecessary debt, bailouts of failing businesses and industries to no appreciable positive effect, budget forecasts that project massive, unsustainable deficit spending far into the future, a moribund housing market, and a host of phony programs like “cash for clunkers” that have done nothing except waste tax dollars.

Unless you were one of the lucky people who got a bailout, cash for a “clunker,” or some other form of government booty, the policies of the Obama Administration and its allies in Congress have accomplished nothing that is positive.  In the meantime enormous government interventions in the economy, through social engineering programs like the “health care reform” legislation, promise to bring new intrusions into our daily lives.  When average Americans look at the dismal record of the economic policies  enacted so far — all of which have failed to live up to the earnest promises of their proponents — they understandably must envision the impending impact of the “health care reform” legislation with fear and loathing.

The only good news for the President and the Democrats is that the American people are no more fooled by the Republicans than they are by the Democrats.  Both parties have let us down; neither has any store of credibility when it comes to governing and spending and taxing responsibly.  If the 2010 election goes favorably for the Republicans and they suck at the job of running the country, no one is going to have the slightest hesitation in voting them out of office and turning to some new alternative.

To borrow the President’s car metaphor, the Republicans may have driven the economy into the ditch, but many of us believe that the President and Congress, like Thelma and Louise, are driving us pell-mell toward a cliff.  I’m hoping that the Republicans will act like sober adults behind the wheel, but I’d even hand the keys to a teenager rather than sit idly in the rear seat and watch as apparently suicidal drivers hopelessly attempt to evade the consequences of their bad decisions and irresponsible policies.

Jesse Jackson says that the United States Government can’t be a “tightwad” now.  Yes, that’s right — after the federal government has spent hundreds of billions of dollars in borrowed money on TARP funds, the “stimulus” package, “Cash for Clunkers,” bank bailouts, home ownership incentive programs, GM and Chrysler bailouts, and countless other examples of unbridled government largesse, Jesse Jackson says it is time to finally open the purse strings!  Otherwise, state and local governments may be forced to actually lay off workers to reflect lower tax revenues, and California college students who have enjoyed heavily subsidized tuitions might actually have to pay something close to what their college education actually costs!  What a cold world it would be if those things were to happen!

I had no idea that Jesse Jackson had such a subtle and keenly developed sense of humor.  Nearly 300 years later, Jonathan Swift’s A Modest Proposal finally has some competition in the satire category.

The Wall Street Journal takes a look back at the “Cash for Clunkers” program, and pronounces it a dismal failure.  The program clearly caused a one-month spike in new car sales, but sales dropped sharply in September, to a point below last September’s sales, and many now believe that the program simply gave people a monetary incentive — funded with tax dollars — to trade in cars and make new car purchases that they would have made in the near future in any case.  In the meantime, many functioning cars were converted to scrap, the used car market was affected as a result, and the federal treasury was depleted to the tune of billions of dollars.

Other than that, it was a roaring success!

The Wall Street Journal editorial on the “Cash for Clunkers” program is worth a read.

There have been lots of problems with the administration of the “Cash for Clunkers” program.  The problems with changing standards, crashing websites, and other bureaucratic snafus doesn’t exactly instill great confidence in the government’s ability to administer some of the other sprawling programs that are being debated in Congress.

What also seems clear, however, is that the program has caused people to turn in their older cars to get the funds to be used for new car purchases — so much so that Congress already is talking about appropriating billions more to continue the program and try to ensure that no dealer gets left in the cold.  With the “Cash for Clunkers” program at least giving some kind of boost to auto sales, we can expect other struggling industries to go to Congress, hat in hand, and ask for their own special stimulus programs.  Before Congress votes more money for these kinds of programs, though, I hope that there is at least some consideration about the efficiency and value of industry-specific programs.  Is it really creating jobs for the federal government to help people buy new cars, or is it just clearing parts of the inventory of new cars at dealerships?   Aren’t people who have real “clunkers” going to buy new cars at some point anyway, and if so, why should taxpayers foot part of the bill?