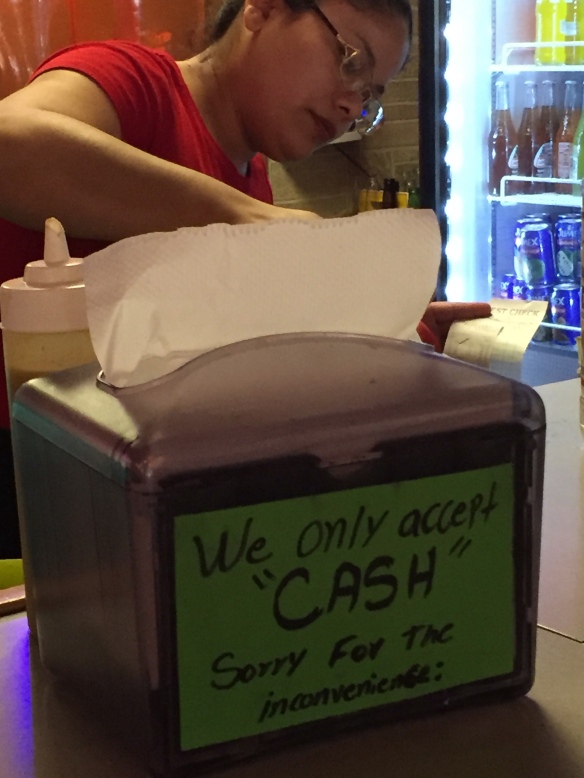 If you take flights on certain airlines, you have heard the announcements that they only accept credit cards if you want to buy a snack box or adult beverage. I always wonder how that can be — aren’t greenbacks legal tender that must be accepted everywhere? How can you deny someone who wants to pay with cash?

So I’ve been happy to go to a few places recently — like this taqueria in Detroit’s Mexicantown neighborhood — that not only accept paper money, they require that you pay with it. But why do they apologize for that policy? The retailer doesn’t have to pay credit card fees, and the purchaser doesn’t have to sign little slips and worry about whether their card data will be hacked. There’s a pleasing, old-school anonymity to paying with folding money that has new-age privacy benefits, too.

In some places, cash is still king. No apologies necessary!

Sweden is generally viewed as the most cashless country on the planet — so cashless, in fact, that authorities are getting a little worried about it. 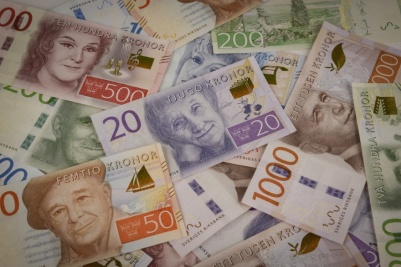 In that Scandinavian land to the north, fully 36 percent of the people never pay for anything with cash — in Sweden, the currency is called the kronor — or use it only once or twice a year.  In 2017, only 25 percent of Swedes pay with cash at least once a week, down from 63 percent in 2013.  The amount of cash in circulation, generally, has fallen precipitously.  Some restaurants and shops don’t accept cash under any circumstances and post “no cash” signs in their windows, and even some bank branches don’t carry cash.  (Bank branches without cash?  What do tellers do?)

So, what’s the concern?  It centers on the elderly, who are accustomed to paying with cash and who might not be comfortable with paying with plastic or their cell phones — or even have access to those payment methods.  The decline in cash acceptance and cash use generally is being examined by Swedish government and the Swedish central bank to determine whether steps should be taken.

Will America eventually reach a similar point?  I hope not.  I like the idea of having a little cash in my pocket, in case the technology breaks down.  Sometimes it’s just easier to pay with cash, too.  And if you are an advocate for personal privacy, cash is a nice option because of its anonymity and untraceability compared to, say, a credit card swipe.  And there are some things that are always done with cash, and presumably always will be:  how would people looking for a handout or bus fare get along in a cashless society?

The rationale for this move is that it costs more to mint the penny ($.016 each) than the penny is worth.  In addition, Canada’s Finance Minister concluded that people weren’t using the penny for business.  Instead, they were just putting them in jars at home.  So, no more Canadian pennies will be minted.  Those that have been minted thus far will remain in circulation — at least until they get tossed into the penny jar on someone’s bedroom dresser or kitchen counter.

It will be interesting to see exactly how this works.  According to the linked article, retailers will charge credit cards to the penny, but the price for people paying cash will be rounded to the nearest five-cent interval.  Odd to think that people paying with declared legal tender might end up paying a few cents more for that privilege than people swiping a plastic card, isn’t it?  I imagine that retailers will just establish uniform prices in five-cent intervals to avoid the issue.  Canadians won’t see any more of those beckoning $9.99 prices that retailers are so fond of; instead, Canadians will be seeing a lot of $9.95.

People have urged the U.S. to do what Canada has done, which is probably the first step toward an entirely electronic economy.  All money is an abstraction, of course, but at least there was a satisfying physical dimension to dollars in your wallet and coins in your pocket, and its cumbersomeness provided some security.  Now, the accounts holding your life savings can be emptied in the blink of an eye by a savvy hacker a world away with a few well-chosen keystrokes.

This is called progress.  Of course, if that unfortunate incident happens, we can all fall back on the pennies we’ve carefully hoarded.