The Tower of London is London’s oldest landmark, and one that is central to the interesting and bloody history of British monarchs. Every tourist guidebook that you might read will tell you it’s a can’t-miss destination if you are visiting London, and they are absolutely right.

The Tower is one of those locations that itself is historic. When you walk around the central courtyard, where gigantic ravens with clipped wings still are found, you know you are walking where Anne Boleyn last trod before her head was separated from her shoulders by the executioner’s axe. It was in these towers that the two little princes deposed by Richard III were last seen, where Henry VIII disposed of various wives, and where countless prisoners were kept until they were ransomed, or beheaded, or freed if their patrons gained favor.

So, the Tower of London is worth a visit. Be prepared for an expensive entrance fee — more than 21 pounds, or about $35 — and big crowds. If you want to see the Crown Jewels (Richard and I didn’t) be prepared to wait in queue for an hour or more.

Some of the parts of the Tower are wonderful; others not so much. Richard and I enjoyed a display about the Tower’s history as the British mint — who knew that Isaac Newton was the long-time head of the mint, and tough on counterfeiters? — as well as the Medieval Palace of Henry II and the intricate graffiti carved into the plaster of the towers by prisoners and preserved for all these years. Imagine the painstaking effort involved as prisoners worked on their messages day after day, knowing that they could spend years in their cells. And the Yeoman Warders, who regularly guide tours of the Tower, are iconic and funny, besides.

There are curiously cheesy elements to a visit to the Tower of London, too. The White Tower, with its spare Norman architecture, is the oldest building in the Tower complex and was built immediately after William the Conqueror successfully invaded England, yet it is filled with bric a brac. 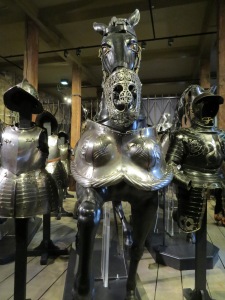 For centuries, the White Tower apparently has hosted a display of mounted British kings on wooden horses that has been a popular destination for distinguished visitors, even though the monarchs wear armor that is acknowledged to be wildly inaccurate. So, the visitor first sees pictures of sultans and other notable prior visitors to that display, then the wooden horses and non-historical suits of armor. Elsewhere in the building you will see a kind of metal, modern art dragon sculpture, a Native American headdress, and other paraphernalia.

For most of the visit, it seems that the White Tower’s history as a tourist destination has rubbed out its history as a fortress and residence. Then you finally reach the fine Chapel Royal of St. John, small and solemn and light-filled and beautiful after all of the consciously touristy stuff, and it makes the entire visit worthwhile.