Thanksgiving is over, so it is officially okay to start thinking about Christmas. If you’re in Columbus and looking for a Christmas tree, stop by St. Mary’s Church in a German Village. This morning volunteers laid in a huge selection of trees to help make your holidays more festive — and pine-scented. 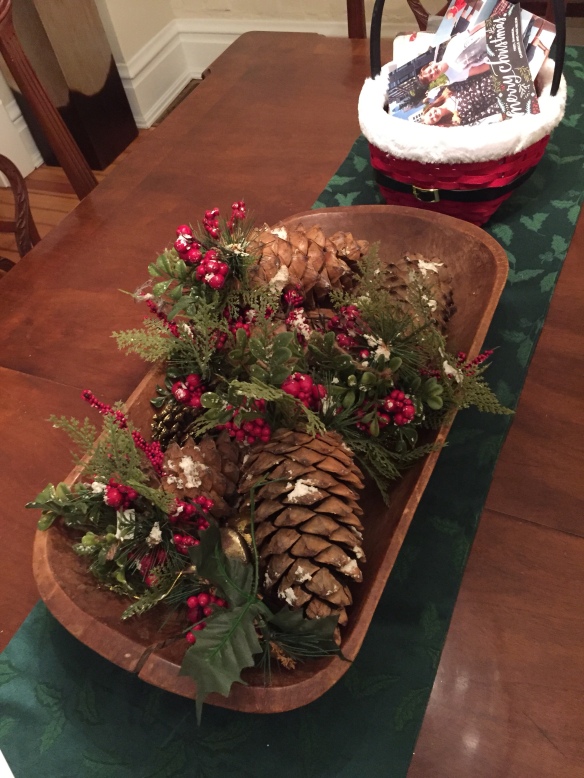 I suppose you could argue that anyone living in a place called German Village should be required to have a Tannenbaum, but Kish and I have never had a tree here. My Grinch-like attitude is that, while Christmas trees smell nice, they’re really too much of a hassle to bother with unless you’ve got kids at home and lots of presents to stash under the boughs. I should add that the one memorable year when the family dog couldn’t resist trying to slurp water from the tree stand and repeatedly knocked the tree over, crushing ornaments that had been treasured heirlooms, crumpling presents underneath, and leaving the family room in our old house strewn with pine needles and glass shards, undoubtedly influenced my anti-tree sentiments.

But even if you don’t have a hulking, rapidly dried-out green object in your living room, you can still be festive around the holidays. Kish is good at adding the little touches that remind you that Christmas is just around the corner. Some snow-dappled pine cones, a Santa-themed holder for holiday cards, a few poinsettias and strategically displayed individual ornaments, and voila! –you’ve captured the Christmas mood.

And no risk of dog-related incidents, either.

You know Christmas isn’t far away when the Christmas tree lots spring up.  Last week they staked out the yard in front of the church school with tree stands, and today the trees arrived.  The air was heady with the smell of pine as the workers unloaded the trucks and then moved the trees to their respective positions.  Now all we need is a fire in an oil drum and some snow to complete the traditional tableau.

Merry Christmas to all of our friends and family!  We hope the holidays bring peace and happiness to all, and joy in spending time with your loved ones.

After a few days of rain and gray skies, Christmas dawned bright and clear in Paris.  The sun was a welcome sight — although it’s only supposed to be a temporary one — and it lit up the dome of the army hospital museum at the end of our street.  In the square right in front of the museum, the merchants have erected a number of Christmas trees, all of which are decorated with delicate, bright, flowing ribbons.

When we were kids, the family Christmas tree always featured fat electric lights, traditional bulbs, and tinsel.  For those too young to remember it, tinsel was long, shiny, quasi-metallic strips that you hung from tree branches.

Tinsel also had the added benefit of being a great way for a brother to torment his sisters.

The most important feature of tinsel was its extraordinary reaction to static electricity.  In fact, I would wager that most boys growing up during the ’60s learned about the properties of static electricity from two objects — tinsel and balloons.

Tinsel was always the last thing to go on the tree, after the electric lights had been strung and the bulbs placed to cover the inevitable gaps on the tree itself.  Mom would open the pack of new tinsel and solemnly remind us to place the tinsel one strip at a time, rather than hurling unsightly gobs of tinsel on the tree limbs.  The preferred single strand hanging approach approximated icicles and turned your tree into an object of glittering beauty.

The single strand placement approach was incredibly boring, however.  My sisters would dutifully follow instructions, but it didn’t take long before I was placing the single strands on the back of my sisters’ sweaters, or on their hair, or shuffling my feet on the carpet and waving my hand past the tinsel to watch it move in response to the static electricity charge.  After that, it was just a matter of time before I was giving UJ and my sisters static electricity shocks and all semblance of an orderly tree decoration process was lost.

Maybe there’s a reason people don’t seem to use tinsel like they used to.

This year’s holiday decorations at the Easton Town Center shopping center here in Columbus are just beautiful.  The towering, blue-lit pine tree placed in the fountain on the north side of the Easton development, with its lights reflected in the fountain pool, is especially striking.