Harlan Ellison has died.  An Ohio native, a graduate of the Ohio State University, and a prolific writer who had a long and productive career, he will always be remembered — by me at least — as the genius who came up with the idea, and wrote most of the screenplay, for one of my all-time favorite Star Trek episodes:  City on the Edge of Forever. 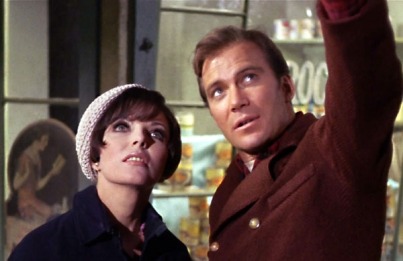 City is generally considered one the finest episodes from the original Star Trek series.  It told the story of Edith Keeler, a gentle, peace-loving woman who lived during the Great Depression, helped the unfortunate, and dreamed big dreams.  When Dr. McCoy is inadvertently injected with a drug that induces a psychotic episode and finds a time portal, he goes back in time and interacts with Edith in a way that somehow changes history, prevents the formation of the Federation, and leaves the Enterprise leadership stranded on the planet with the time portal.  Kirk and Spock use the portal to try to fix the damage and also go back to the Depression era, where Spock attempts to build a primitive computer from vacuum tubes — or, as he puts it, “stone knives and bearskins” — to learn what happened and Kirk falls madly in love with Edith.  When Spock determines that McCoy somehow saved Edith from death, and thereby created a universe in which her pacifist leadership delayed America’s entry into World War II and gave Nazi Germany time to win the race to build atomic weapons and capture the world, Kirk has to make the excruciating decision to allow the woman he loves to die.

When he does so, and he and Spock and McCoy return to the planet with the time portal, a heartbroken Kirk says “Let’s get the hell out of here” to end the episode — which legend says was the first time a curse word of any kind was broadcast on American network television, and the censors let it go because it punctuated the episode perfectly.

It turns out that the City episode was a point of great contention between Ellison and Gene Roddenberry, the creator of Star Trek who thought producing the episode as Ellison wrote it would just be too expensive.  Ellison wasn’t happy with the changes that were made and asked that a pseudonym be listed as the script writer, but Roddenberry kept Ellison’s name on the episode — which then won Ellison a Hugo Award.  Ellison was still fighting, and writing, about the episode years later.

RIP, Harlan Ellison, and thank you for an impressive body of work that just happens to include an all-time classic idea.

Scientists have conducted experiments that have confirmed that individual photons cannot travel faster than the speed of light in a vacuum.

Fortunately for fans of time travel everywhere (and everywhen), Einstein’s theories still permit random intersections of curved space-time continuums — i.e., wormholes — through which time travel could occur.  Thus, it remains possible that Star Trek‘s Dr. Leonard McCoy could inadvertently cause the Nazis to win World War II and that H.G. Wells’ Time Traveller could save Weena from the Morlocks, and you should still take care not to accidentally kill an ancestor and thereby prevent your own birth.