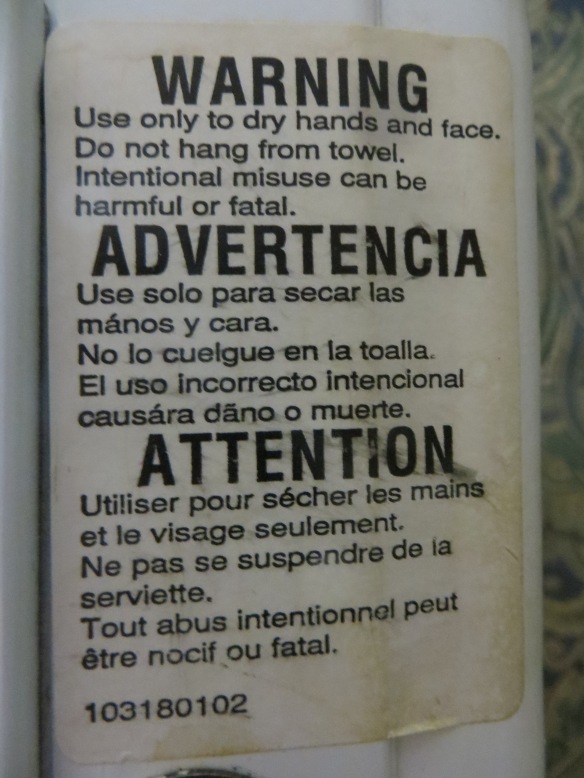 Today I saw an alarming warning sign.  It appeared, of all places, on the metal lid of one of those rolling cloth towels you find in some older restrooms, and I saw it as I was drying my hands.

What were the warnings?  First:  “Use only to dry hands and face.”  Ewww!  I never considered it could be used for other drying purposes, or washing purposes.  I must admit that that warning made me eye the visible cloth toweling suspiciously and wish that I had dried my hands with toilet paper.

Second:  “Do not hang from towel.”  Check.  Say, is that warning really necessary?  In the history of Anglo-Saxon jurisprudence, has there ever been an incident of a tort claim caused by failure to warn not to hang from a cloth towel dispenser?

And third:  “Intentional misuse can be harmful or fatal.”  Harmful, okay.  Fool around with the towel, slip on a wet floor, dislocate something.  But fatal?  How?  Hanging?  Choking?

The sign didn’t say, and left all my questions unanswered.

Recently I was in a public restroom that featured a Dyson Airblade hand dryer, and it made me happy to be in America.

My thinking went like this.  When I was a little kid, there were two kinds of public restroom hand-drying options:  paper towels and a large cloth towel on a roller.  Both worked, after a fashion; you could dry your hands adequately, most of the time.  But both had their flaws.  The paper towels often came out in clumps and gave rise to serious bathroom litter issues.  The cloth roller, in contrast, avoided the litter problem, but often jammed, and it wasn’t uncommon to find a hopelessly disgusting, saturated, and soiled towel — which caused most guys to just wipe their hands on their shirts or pants.

In many countries, though, these two options would have been just fine.  Why waste money and the spirit of invention on a public bathroom?  Who cares if they are vile places?  But America is different, isn’t it?  Here, gas stations may actually advertise that they have clean bathrooms.  So some enterprising soul decided to use a hot air blower as a hand dryer.  It was better than the cloth towel roller or the paper towels — and certainly cheaper for the proprietor — but it wasn’t perfect.  You had to push a button, which had to be cleaned, and water dripped from your hands onto the floor as the blow-drying occurred, and the air often became uncomfortably hot and dried your hands unevenly.  Still, the initial generation of blow dryers would be plenty good enough for most places.

But not in America.  Now, we go into bathrooms with Dyson Airblades.  No button to push, no dirty cloth towel to yank, no mountain of paper towels overflowing from a trash can.  Just a sleek little device where you insert your wet hands to start the process and then withdraw them quickly, clean and dry.  Not bad!

It’s just another reason why capitalism is great.