Memorial Day comes very early this year, but for a grateful nation it is never too early to appreciate those who have served on behalf of their country.  On this day, we take time to remember the selfless men and women who have fallen, and to recognize those who are serving yet today.  We say thank you to the soldiers and sailors, to the Marines, the Air Force pilots, and the Coast Guard captains, and — because it is the 21st century, after all — to the members of the newest branch of the U.S. military, to the members of the U.S. Space Force.

Thank you for all you have done and are doing to keep our nation safe and strong! 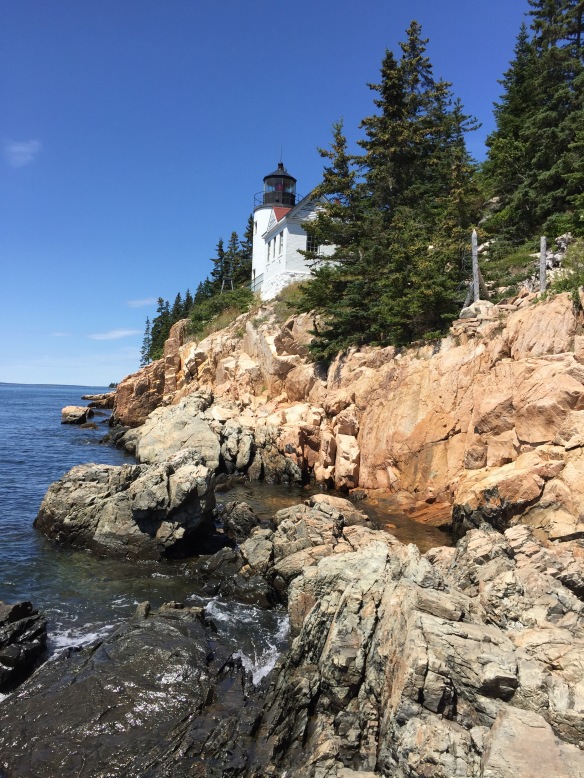 Today we checked out the Bass Harbor Head Lighthouse.  It’s one of dozens of lighthouses that are found along the rockbound Maine coastline — each of which has it distinctive combination of light color and lighting sequence, so experienced mariners who are at sea at night can both steer clear of the rocks and determine exactly where they are, even in the darkest hours.

At the lighthouse, you can follow a path and a steep set of wooden stairs that take you down to sea level, where intrepid tourists (like me) can climb out onto the rocky coastline to position themselves for the best photographic vantage point that will allow them to snap a seaside shot of the iconic white lighthouse.  It’s comical to see people of all ages scrambling out onto the rocks — with no guard rails or identified path — and of course many of the visitors were taking selfies, apparently oblivious to the risk they might slip as they were positioning themselves and go plunging into the ocean below.  Fortunately, no one was injured while we were there.

I appreciate the fact that the Coast Guard, which operates the lighthouse and its grounds, has left the coastline in its natural state and trusts visitors to fend for themselves.  It was fun to let the inner mountain goat out for a rocky adventure.

So many wars — and those are just the ones that have official names.  In between there have been countless smaller conflicts and instances of service, where members of the armed forces have fought against the Barbary pirates, or rescued hostages, or delivered crucial supplies to survivors of hurricanes or earthquakes.  And in the middle of it all has been the individual Americans serving in the Navy, the Army, the Marines, the Air Force, or the Coast Guard, who have safeguarded our shores, fought against the oppressors, and delivered help in times of need — and often made the ultimate sacrifice.