It seems that people collect almost everything these days, and are willing to pay amazing amounts of money to do so.  Still, some of the “collectables” are decidedly . . . odd.

Consider a recent auction in England, where an anonymous collector paid $16,500 for a pair of Queen Victoria’s underpants.  The white cotton u-trou, which are, well, expansive, bear a monogram with a crown and a “VR,” and experts believe they were worn by England’s longest-serving monarch back in the 1890s.

This story is weird on two levels.  First, why would anyone want to acquire such items?  Were the Queen’s old bloomers bought to be part of a collection of royal family memorabilia, or as part of the apparently growing interest in underwear collection — with people paying big money for the unmentionables of Elvis and Michael Jackson and even the dingy undergear sported by Walter White on Breaking Bad?  Are these underwear collections ever actually displayed to anyone?  Can you imagine being invited to someone’s country estate and, while there, being taken by the proud owner on a tour of their collection of celebrity boxers and briefs, nicely displayed in glass cases?  Small wonder that the bidders at these auctions are acting anonymously.

Second, it’s sad that people are selling this stuff, and it’s got to be embarrassing for the descendants of the long-deceased Queen.  Who wants to see an ancestor’s underwear being publicly displayed, especially when it is very much plus-sized?  Apparently Queen Victoria’s clothing was parceled out to staff members after her death, and some of the staffers’ families kept the garments for generations before finally being unable to resist the temptation to make a few bucks.  If I were Queen Elizabeth, or any member of the current royal family, or any kind of celebrity, I’d make sure to include a provision in my will that required all of my underwear be cast into the bonfire as soon as I breathed my last.

Ironic, isn’t it?  Queen Victoria so characterized primness and propriety that people now use the phrase “Victorian attitudes” to refer to antiquated, repressive views on gender and sex — and yet Queen Victoria’s underwear is being publicly displayed, sold to strangers, and made the subject of jokes because of its size.  I think the Queen would be shocked and sternly disapproving of this regrettable development.

Guess what?  American bureaucracies aren’t the only ones that are ridiculous. 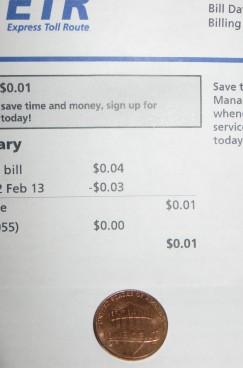 Last October I went to Lake Temagami in northern Ontario, Canada for a wonderful few days of fishing.  To get there, I drove on the Express Toll Route.  Rather than simply paying the toll as you pass through, the ETR takes a picture of your car, figures out where you live, and then sends you a bill.

A few weeks after my trip ended, I received a bill.  We paid it in full.  Then, some time later, we got another bill — for four cents.  Why the four-cent differential?  I’m not sure, but I’m guessing the U.S. dollar-Canadian dollar exchange rate might be responsible.  In any case, we wrote a check for 4 cents and sent that off.  Obviously, the cost of postage and the cost of processing the check on both ends far outstripped the 4-cent payment.  But, so be it!  We are interested in maintaining friendly relations with our Neighbors to the North, and if I ever am invited back to Lake Temagami I don’t want to be hauled away as a scofflaw and tossed into debtors’ prison by the Royal Canadian Mounted Police.

Then we received the bill above, demanding a balance due of . . . one cent.  One cent!  I’m blaming the exchange rate again, because the bottom of the bill says, under “amount paid,” “Canadian funds.”  Of course, there is no way I can write a check on my American bank for one cent, Canadian.  The letter specifically says that I can’t send cash.  And if you think I’m going to risk giving my credit card information, on-line, to bureaucrats who are trying to chase down people who have paid, in full, twice already, you’ve got another think coming.  So, my only choice is to write a check for 5 cents, American, and hope that it accounts for the exchange rate and is finally accepted as payment in full by the ETR collectors.

I’ve never really thought much about toll booths before, or fully appreciated the schmoes working inside.  Now, I do.  The next time I toss 75 cents into the collection bin, I’ll relish that I can simply drive on, free from care that I’ve just become mired forever in an endless sea of red tape.