Tonight the Ohio State University Buckeyes play the Alabama Crimson Tide in the College Football Playoff National Championship Game. If you paid attention to the pundits, or the Las Vegas oddsmakers, you would conclude that Ohio State has no realistic chance in this game. In fact, some of the talking heads are saying that Alabama is so unstoppable, so overwhelming, and so unbeatable that the Buckeyes will have to play a perfect game just to avoid getting humiliatingly blown off the field.

Medieval historians might say that the game tonight is as much of an apparent mismatch as the Battle of Agincourt. Fought in 1415, during the 100 Years’ War, the Battle of Agincourt pitted a tiny English army against a much larger host of French knights in a battle fought on the French army’s home turf. If ESPN had existed in those days, the commentators would all have predicted that the Franch would overwhelm the outmanned English. But King Henry V had a weapon on his side: a positive attitude. As Shakespeare envisioned it, rather than despairing in the face of the overwhelming Franch force on the eve of battle, Henry told his gallant group of men that they should feel lucky to be at that spot in that moment. Henry’s stirring speech famously concludes with this passage:

This day is call’d the feast of Crispian.
He that outlives this day, and comes safe home,
Will stand a tip-toe when this day is nam’d,
And rouse him at the name of Crispian.
He that shall live this day, and see old age,
Will yearly on the vigil feast his neighbours,
And say “To-morrow is Saint Crispian.”
Then will he strip his sleeve and show his scars,
And say “These wounds I had on Crispin’s day.”
Old men forget; yet all shall be forgot,
But he’ll remember, with advantages,
What feats he did that day. Then shall our names,
Familiar in his mouth as household words—
Harry the King, Bedford and Exeter,
Warwick and Talbot, Salisbury and Gloucester—
Be in their flowing cups freshly rememb’red.
This story shall the good man teach his son;
And Crispin Crispian shall ne’er go by,
From this day to the ending of the world,
But we in it shall be rememberèd—
We few, we happy few, we band of brothers;
For he to-day that sheds his blood with me
Shall be my brother; be he ne’er so vile,
This day shall gentle his condition;
And gentlemen in England now a-bed
Shall think themselves accurs’d they were not here,
And hold their manhoods cheap whiles any speaks
That fought with us upon Saint Crispin’s day.

Henry was right. Against all odds, the English won a decisive victory at the Battle of Agincourt, using the power of positive thinking — and, not incidentally, a new weapon, the English longbow — to crush the haughty, overconfident French and rout their army.

If the English could do it, so can the Buckeyes. No foe is unbeatable, and no ESPN commentator is infallible.

What do you say, Buckeye Nation? Let’s stay positive and root like crazy for the Men of the Scarlet and Gray to stand toe-to-toe with Alabama and win this game!

The Power Of Positive Thinking

Every year, it seems, the talk on the Sunday where the participants in the College Football Playoff are finally decided is all about the Ohio State Buckeyes.  Should they go, or shouldn’t they?

This year is no different.  With Ohio State’s win over Wisconsin last night, a game in which the Buckeyes were led by a gutty J.T. Barrett, only days after he’d had knee surgery, the Buckeyes are 11-2 and the official Big Ten champions.  Normally, you’d think the Big Ten champs would be in easily — but in one of those losses the Buckeyes got waxed at Iowa, losing by 31 points in one of those games that shows you that anyone who thinks they can predict college athletics just doesn’t know what they’re talking about.  The first three teams in to the College Football Playoff are easy decisions:  Clemson, Georgia, and Oklahoma, which handed the Buckeyes their other loss.  And now the chatter is whether the fourth team should be Ohio State, the Big Ten champ with that one big matzo ball of a bad loss, or Alabama, which has only one loss but didn’t play in its conference championship game, lost its only game of the season against an elite team, and played a schedule that wasn’t very difficult.

It’s a tough question, and as an Ohio State fan I’m king of torn.  Last year’s blowout loss to Clemson in the College Football Playoff rattled a lot of us.  We love our Buckeyes, but that defeat — and then the Iowa debacle this year — has introduced an element of doubt for many.  We don’t want to see the Men of the Scarlet and Gray get in, and then get creamed.  And since the Buckeyes would be the fourth seed if they were to make it, they’d play Clemson again.  Would another humiliating spanking be in the offing?

On the other hand, you’ve got to give Ohio State credit for playing one of the toughest schedules in the country.  They’ve beaten a number of very good teams, including Penn State in an epic comeback, and they bounced back after the Iowa loss to thrash Michigan State, win their great rivalry game against Michigan on the road, and then beat a tough Wisconsin team on a neutral field.  And, while Ohio State’s win over Wisconsin was only by six points, I think the Buckeyes clearly were the superior team by a larger margin than the score indicated.

So, should it be the Buckeyes, or the Crimson Tide?  Call me a homer, but I think a conference championship should count for something, and I think fans can’t let their fears stand in the way of the dreams of young men who’ve played hard and had a fine season.  I hope the Buckeyes make it.

There’s a lot of dislike for, and skepticism about, the Ohio State Buckeye football team lurking out there.  All of the sports pundits are picking Alabama to win easily, and the Las Vegas oddsmakers have the Crimson Tide as a 9.5 point favorite.  That’s a lot of points when you consider both Ohio State and Alabama have only one loss and Ohio State just won its conference championship game by a 59-0 score. 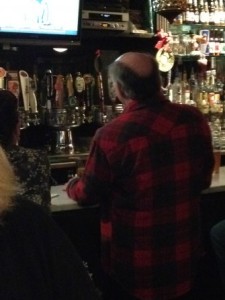 We experienced some of this pervasive anti-OSU passion firsthand during our recent trip to Jacksonville.  When we were enjoying a beer and some appetizers at a Riverside neighborhood tavern, we overheard this guy ranting about how Ohio State didn’t deserve to make the playoffs.  Actually, “overheard” isn’t quite the right word — this jerk was so loud that you couldn’t help but hear the scorn he poured on our beloved Buckeyes. To make matters worse, his name was Bob.

Why was this guy so deadset on saying that the Buckeyes were pretenders?  There were lots of reasons.  The Big Ten sucks.  Everyone knows that Ohio State chokes in big games.  The Virginia Tech loss showed Ohio State’s true value as a team.  Urban Meyer is a decent coach, but he screwed the University of Florida.  And, as is usually the case, he had a conspiracy theory, too — it’s all about money.  I don’t think he was saying that anyone got paid off to put the Buckeyes in; instead, he believed the playoff selection committee wanted to pick a Midwestern team to try to increase interest in the first-ever playoff, and Ohio State is about as well-supported and Midwestern a team as there is.

We didn’t engage with this loudmouth; you’re not going to change the mind of somebody like that with reasoned discourse, and there’s no point in getting into an argument in a bar.  But listening to his diatribe was enlightening.  It showed a perspective on Ohio State that is a lot different from what you get here in the heart of Buckeye Nation.  We won’t be able to change the conspiracy theories, but a win over Alabama Thursday night would go a long way toward changing some of the other views.