Kish and I always get a chuckle out of the Progressive Insurance commercials featuring Dr. Rick, the “Parenta-Life Coach” who tries to help young homeowners avoid turning into their parents. Part of what makes the commercials so funny is that they are spot on — especially the point about making noise when you sit down or rise from your seat — and “We all see it” has become a catch phrase in our household.

Some new Dr. Rick commercials have come out recently, which makes us hope that this will be a continuing series. To encourage some more Dr. Rick spots, here are some suggestions on other telltale signs that he might point out to his prematurely aged pupils:

The possibilities are pretty much endless.

Have you ever felt like you’re reenacting a TV commercial in which you’re the baffled consumer unable to resolve a curious household problem?

Frustrated woman with haunted look as she hears mocking taunts of “ring around the collar!”: “I’ve tried scrubbing them out, and soaking them out, but nothing seems to work!”

Embarrassed woman who sees a cloud of gas with images of dogs and babies in diapers inside lingering in her living room as she prepares for guests: “What can I do to give my house that clean, fresh scent?”

Mystified Webners: “The glasses that come out of our dishwasher seem to be coated with some thin kind of film. How can we eliminate the scourge of cloudy glasses and make our glasses sparkling clean?”

In the commercials, at this point some officious busybody named Madge shows up and gives the answer that allows the grateful consumer to solve the problem of ring around the collar or reeking rooms. So far, though, no complete stranger, genie, or disembodied voice has provided us with guidance on resolving the cloudy glass conundrum, and none of the additives, rinses, or other commercial products we’ve tried have done the trick.

This isn’t an earthshaking problem, of course, but it would be nice to have glasses that are transparent. And while we could pre-wash or post-wash them, that defeats the point of a dishwasher, doesn’t it?

I guess all we can do is cast our gaze skyward, say “what’s a troubled dishwasher owner to do?,” and hope for the best.

Super Bowl LI will be the stuff of legend, but the commercials during the game?  Not so much.

I can’t say that I saw every commercial broadcast during the game, of course, but the ones I did see weren’t very memorable.  Basically, in this Super Bowl as in other Super Bowls, the commercials fell into two main categories:  the tedious “story” ads that hit you over the head with a message, and the ads that are supposed to be funny.  (There’s also a third category of weird, one-off ads from companies that simply want to get their name out there during the Super Bowl, even though there is basically no chance that 99.99% of the viewing audience will ever purchase their product or service.  This year, the Morgan Freeman ad for Turkish Airlines aptly represents that category.  Turkish Airlines?  Really?)

The enormous Super Bowl audience endures the “story” ads, and accepts the perverse notion of large corporate sponsors lecturing us on the proper way of thinking about something, in hopes that the ads that are trying to be funny will make us laugh.

This year . . . not so much.  I like seeing Melissa McCarthy slammed around as much as the next guy, but her ad was symptomatic of the flaws that seemed to infect all of the wannabe funny ads — a thin premise that gets beaten to death and tries way too hard.  You sit and watch them, kind of shake your head, and marvel that this is the best that a huge ad agency and a million-dollar commercial buy can do.  I didn’t see anything clever or original in a way comparable to the classic “Doberhuahua” ad from a few years ago, for example — and because we could all use a hearty laugh these days, I’ve linked to it below.

Who knows?  Maybe a symptom of aging is that you think the commercials during past Super Bowls are better than the current crop — but I doubt it.

I’ve really come to dislike those T-Mobile commercials.  Filled with quick cuts from one group of happy, dancing twenty-somethings to guitar-playing scruffs to youthful, grinning selfie-snappers, all of whom are precisely dishevelled and wearing kicky scarves and snazzy hats, the T-Mobile commercials are even more specifically focused at an age group than toy commercials on Saturday morning TV.

And it’s an age group that I no longer belong to. 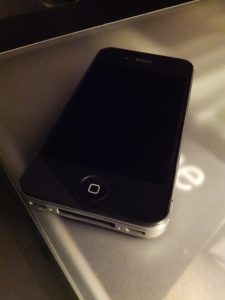 I’ve been dimly aware for some time that I’m completely out of it when it comes to phones.  I know this because of the shocked expressions of my younger colleagues when I haul out my cell phone, immediately followed by a bemused expression when I plug it in to charge the battery — again.  It’s the same bemused expression you probably gave your grandparents when you noticed that they spilled food on themselves while eating a recent meal and are walking around with tomato soup on their blouse and breadcrumbs on their cardigan.

I think I’ve got an iPhone 4.  Could a new iPhone do more, if I got one?  Undoubtedly.  But my current phone provides the limited phone/email/internet access/apps I actually use — and, candidly, rather than being moved to ecstatic dancing about getting a new phone, I kind of dread the thought.  I know that when I go to get one the customer service rep will be some precisely dishevelled, phone-arrogant twenty-something who probably plays guitar on breaks who will ask me condescending questions about my phone needs that I don’t fully understand.  It’s nettlesome.  Plus, there’s an obvious risk that, when I get a new phone, the apps I actually use will mysteriously vanish or move or be unworkable.  So I stick to my old, tried-and-true, reliable-if-constantly-leaking-battery-power phone.

When I see those irritating T-Mobile commercials, I feel guilty about my phone backwardness — but then I read a recent survey that shows that a majority of Americans will upgrade their phones only when the phone stops working or becomes obsolete.  That basically means I’m still comfortably in the majority and maybe even a titch ahead of the curve, because my phone still works fine and doesn’t appear to be obsolete — not that I would know.

Ha!  So take that, T-Mobile!  It’s nice to know that there is a Silent Majority of technology-challenged Americans who aren’t data obsessed and sent into paroxyms of dancing joy by the newest cell phone and data service plan.

Now excuse me while I check my shirt for food stains.

I’ve been watching TV commercials for more than 50 years.  For my money, the greatest ad campaign in history was for Miller Lite in the 1970s.

The campaign’s task was daunting indeed — get men to drink diet beer.  Diet beer???  For the men of the ’70s, who were used to drinking Schlitz, and Stroh’s, and Budweiser, and other mass-produced beers of the day?  You have to convince beer drinkers to worry about how many calories were found in each bottle, when they’re used to downing a six-pack without batting an eye?  You’ve got to be kidding, right?

So they called it “lite” beer because they knew that calling it “diet” beer would be rejected as totally unmanly.  And, they came up with a memorable catch phrase — “great taste . . . less filling” — even though no beer drinker in the long history of suds ever gave a thought to a cold beer being too “filling.”  And to make the drink even more acceptable in the macho ’70s, they had retired athletes serve as the primary pitchmen for the new beer, in clever, funny commercials that often had the jocks ready to brawl to settle their shouted disagreement about whether “tastes great” or “less filling” better described the brew.  (To get a sense of the underlying testosterone in the commercials, take a look at this ’70s spot involving former NFL middle linebacker Dick Butkus, who was one of the most popular Miller Lite commercial stars in those early days.)

And somehow, it worked.  Miller Lite ushered in an era in which other brewers rushed to offer poorly conceived “light” beers — I once consumed an Iron City Light Beer, and barely lived to tell the tale — and what was at one time an American market that was dominated by a few boring pilsner products offered by large national brands started to diversify.  The trend continued, and now a trip to your local grocer is likely to present you with a dizzying choice of porters, stouts, Belgian ales, wheat beers, light beers, and even non-alcoholic brews, where once only Budweiser and Schlitz and one or two others were found.

I’m not saying that Miller Lite inevitably produced the craft beer explosion, but I do think the Miller Lite ad campaign created a crack in a closed market that soon was knocked wide open, and it did it with a clever name, a clever slogan, and funny commercials with ex-athletes — lots and lots of ex-athletes.  How many later ad campaigns for products for men followed that winning formula?