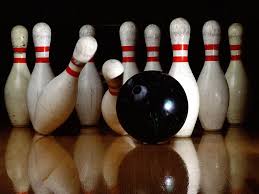 Being semi-retired I’ve had some time to reflect back on events of my childhood that probably helped shape my character and one such event included little brother Bob.

When we were youngsters we spent a lot of time with Mom’s parents Gilbert and Maude Neal shown below. Grandma and Grandpa Neal were active grandparents, participants in several bowling leagues and both obviously loved to bowl.

No matter what the weather they would be at our house early every Saturday morning to pick us up when we lived in Akron and we would head off to Riviera Lanes to bowl. When they first took us we couldn’t even pick up the bowling ball so we would set it on the foul line and push it down the alley.

One Saturday Bob began his game by rolling two gutter balls in the first frame and followed that up with two gutter balls each in both the second, third and fourth frames. Being competitive brothers back then I couldn’t have been more thrilled with what was happening and was obviously hoping for more of the same.

Fifth, sixth and seventh frames all gutter balls from Bob, are you kidding me this was too good to be true I was delighted and started to wonder if maybe he wouldn’t get a single pin for the whole game. Ha – wouldn’t that be great, boy then I could really rub it in !

The eighth and ninth frames came and went with two more gutter balls in each frame from Bob. Wait a minute something was terribly wrong, the elation I felt just a couple of frames earlier was gone, it was no longer there. I actually found myself wanting to root for him in the tenth frame, come one one pin at least let him get one pin !

Unfortunately it was not to be, two more gutter balls followed in the tenth frame and Bob walked back and started to cry. So what did I do – I started to cry too ! Grandma Neal looked at me and said “Jimmy why are you crying Bobby had the bad game and I said I feel bad for my brother”.

Ha Ha – kinda a corny story, but true. I think the life lesson I learned from bowling that day is that nothing positive is gained from using your emotions in a negative way !