By now most of us have seen the video footage of Democratic presidential nominee Hillary Clinton apparently collapsing in the arms of staff and Secret Service agents and being dragged into a van after an abrupt exit from a 9/11 ceremony.  After first saying that Clinton was simply “overheated,” her campaign later released a statement from her doctor that, three days earlier, Clinton had been diagnosed with pneumonia.  The problem at the 9/11 ceremony, the doctor said, was that Clinton became dehydrated.

Having pneumonia certainly doesn’t disqualify a person from being President.  We’ve had Presidents who have dealt with lots of illnesses over the years, and pneumonia is a treatable condition thanks to the miracle of modern medicine. 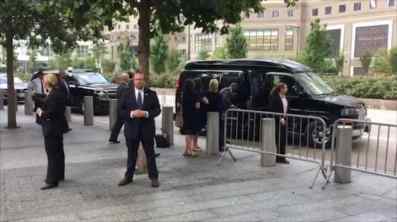 Still, I think the pneumonia incident is a problem for the Clinton campaign, because it once again suggests that Americans aren’t getting the whole story.  Clinton has been dogged by coughing fits that have produced lots of chatter about her health — chatter that her campaign has tried to downplay as the feverish imaginings of right-wing nuts.  Now she experiences a public health episode and has to be physically supported and lifted into a van, and the campaign first tries to downplay the incident.  Then, when the story starts to really take hold, the campaign discloses that days earlier Clinton had learned she had pneumonia.  You have to wonder whether her real condition would have been disclosed but for the fact that someone took a video that showed Clinton’s apparent collapse — a video that would make any fair-minded person wonder about her health.

This pneumonia incident is just one more example of the Clinton approach to bad news, whether it’s the investigation of her email practices, her fundraising speeches to Wall Street fat cats, or other issues.  The first reaction is to deny, deny, deny, attack the messenger, and hope that friends in the media and the political world will cooperate in quashing the story.  The facts ultimately come out in dribs and drabs, and you never feel like you get the whole truth.

Trust and credibility are important characteristics of a presidential candidate. Voters want to believe that the candidate of their choice is open, above board, and a person of integrity.  The Clinton penchant for secrecy and denial is antithetical to that kind of belief.  It’s one of the reasons why Clinton isn’t pulling away from Donald Trump, despite his many flaws. With the pneumonia incident we’ve just been reminded of her credibility issues in a very public, visible, undeniable way.  It will be interesting to see how the voters react.

This is the weirdest political campaign I can remember — weirder even than the awkward George H.W. Bush, Bill Clinton and Ross Perot fandango in 1992 — and yesterday it got even weirder with New Jersey Governor Chris Christie’s endorsement of Donald Trump.

Trump is supposed to be the anti-establishment outsider . . . but now he’s trotting out endorsements from establishment figures like sitting governors, like having credibility with the establishment means something?  It’s a very mixed message for the guy who supposedly doesn’t give a rat’s patootie for conventional politics.  And the timing of the Christie announcement seems pretty political, too.  Trump got trounced and humiliated in the Republican debate, there’s a lot of buzz and discussion of that fact . . . and then Trump trots out Christie to try to change that narrative.  It may be smart politics, but it’s also conventional politics.  Trump is playing the game, just like everybody else.  Will his supporters ever see that? 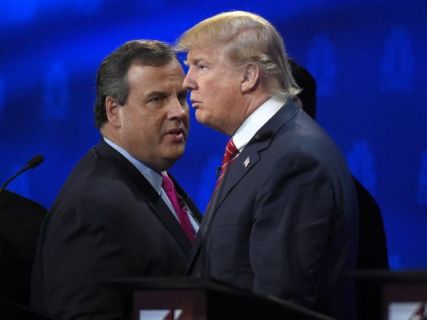 It’s also pretty laughable that pundits are saying that the Christie endorsement, and other, similar announcements that may be forthcoming, will “legitimize” Trump.  Really?  As far as I’m concerned, you could trot out hundreds of governors, senators, and mayors to praise Trump to the skies, and he would be no more “legitimate” than he is now.  Trump will be “legitimate” only when he takes the responsibilities of a presidential candidate seriously and starts actually learning something about the issues.  I don’t want a President who’s going to wing it, and endorsements aren’t a substitute for actual hard work.  Until Trump starts to do some studying and show some knowledge — which will happen on the 12th of Never — he’s just showing contempt for what is supposed to be an important exercise in democracy.

The Christie endorsement makes me lose a lot of respect for the news media, and for Chris Christie, too.  The media is Trump-obsessed, and the Christie endorsement just made all of the news channels give free air time to Trump so he can engage in his antics and belittle his adversaries.  They’re playing Trump’s game because he’s a polarizing figure who will make people tune in and drive up their ratings, and his outrageous statements provide daily news stories that make their jobs easier.  The press hasn’t exactly covered itself with glory this year.  And Christie has lost whatever claim he had to being a credible national figure.  Christie is no dummy; there’s no way he can legitimately believe Trump is best suited to sit in the Oval Office.  Christie obviously is betting on what he thinks will be the winning horse.  Maybe Christie just wants to be one of those unidentified “top men” the Trumpster is always talking about using to get things done if he becomes President.

The issue of the United States’ response to the apparent use of chemical weapons by the Syrian government has been on the front burner for weeks now.  After fruitless efforts to build an international coalition, followed by vows to go it alone, then by a decision to seek congressional approval, it seems late in the game for a new proposal.  But that’s what happened yesterday.

Secretary of State John Kerry, in response to a question at a news conference, said Syria could avert a U.S. attack by placing its chemical weapons under international control — whatever that means.  The Obama Administration said Kerry’s response was a “rhetorical argument” that wasn’t meant to make a diplomatic overture, but that was how it was treated.  Russia, Syria, and others in the international community immediately expressed support for the idea, as did congressional Democrats who don’t want to vote on whether to authorize the President to use military force.  By the end of the day, Senate Majority Leader Harry Reid announced that the Senate vote on the issue would, in fact, be delayed.  And when President Obama last night sat for interviews in a TV blitz designed to build support for a limited strike, he was responding to the news, rather than making it.  In view of the reaction to Kerry’s comment,  the President said he would put plans for a military strike on hold if Syria put its weapons stockpile under international control — although he expressed skepticism it would happen.  Of course, the obvious question is:  if the President is skeptical, why would the Secretary of State make the proposal in the first place?

Tonight the President is supposed to make a speech to the American people about the Syrian issue.  Perhaps he will take the opportunity to explain his Administration’s confusing approach to the issue, with the American position seemingly swaying in the wind created every time John Kerry speaks.

The President and his supporters profess to be mystified by why Americans aren’t supporting their policy on Syria, whatever it is.  It’s not that Americans aren’t sickened by the use of chemical weapons.  Instead, it’s that this Administration has little credibility when it says that America needs to act, alone if necessary, to address the situation.  We don’t understand why this should be our job, and we simply don’t credit the Administration’s increasingly outlandish promises — like Secretary Kerry’s statement yesterday that the military effort needed to “degrade” the Assad regime’s chemical weapons capabilities would be “unbelievably small.”   We also see what has happened in Libya and Egypt and don’t believe that some kind of thread-the-needle air strike can “degrade” chemical weapons capabilities without creating more chaos in an already chaotic region.  The credibility gap isn’t helped by the Administration’s shifting positions and heedless issuance of offhand ultimatums that apparently weren’t intended to be ultimatums in the first place.