The coronavirus pandemic has had a very unequal financial impact on people. Those who have been laid off, or been forced to close their businesses altogether, because of COVID-19 shutdown orders have been devastated. Many white-collar workers who can do their jobs remotely, on the other hand, are looking back on 2020 as a year where their financial situations surprisingly improved. They didn’t spend as much on discretionary items such as travel, dining out, and trips to the corner tavern, paid off some or all of their credit card bills, and saw their 401(k) accounts enjoy a solid year in the stock market.

Another area of unequal impact is on housing and real estate prices. House prices are up nationally, and the biggest increases are concentrated in the heartland — in the Midwest, the states of the Great Plains, and the Southwest and Mountain West. Cities like Cleveland, Cincinnati, Indianapolis, Boise, and Kansas City have seen 10 percent jumps in house prices over the last year. And the rate of increase in house prices in those markets seems to be escalating.

Analysts attribute the jump to people fleeing the crowded coasts for middle America, where living is a bit less concentrated and house prices are a lot more reasonable. You’re going to get a lot more housing bang for your buck away from the coastal cities. And with remote work becoming the “new normal” for many people — a trend that isn’t likely to change even when vaccines become widespread — people are seeing new possibilities and opportunities in living in flyover country. Salaries are going to go a lot farther in establishing a really nice lifestyle in a place like Kansas City than they would in, say, San Francisco.

The American economy is a huge, sprawling, complicated thing, and expert predictions about it are often dead wrong. One thing is clear, however: unequal economic impacts aren’t good for our society, or sustainable long term. It’s interesting that some people have seen their financial situations improve, and that big-picture demographic changes seem to be underway, but we can’t forget those people who have been directly harmed by shutdown orders. The vaccine rollout, and the lifting of restrictions on bars, restaurants, sporting events, and live music performances, can’t happen soon enough.

Sometime in the very near future, the world will witness something that has never before happened in the history of homo sapiens:  the number of people 65 and older will be larger than the number of children under the age of 5.

Demographic experts call it “the crossing.”  It’s the point at which the upward moving line on the age chart representing people 65 and up crosses the declining line representing children under the age of 5.  The result is like a big X on a graph, because once the crossing occurs, those two trend lines are forecast to continue until, by 2050, the number of senior citizens will be more than double the number of young children. 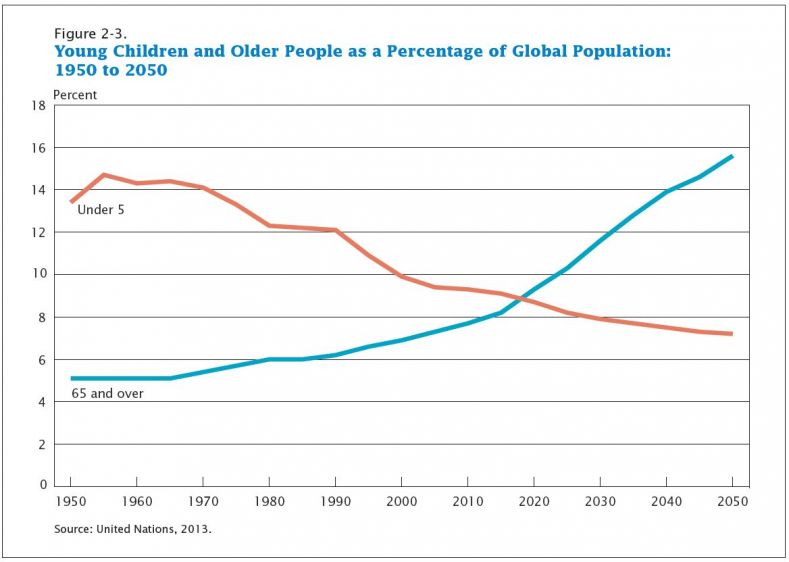 Why is this happening?  The old age part is the easiest to explain:  advances in medicine and treatment of disease are allowing people to live much, much longer than they ever have before.  We’re routinely setting records on life expectancy and the number of people who have lived past 90 and even 100.

The other line on the graph, though, isn’t so readily explained.  In some countries, people are just having fewer children, or no children at all.  This isn’t a worldwide phenomenon, but one that has focused on certain “first-world” countries.  Japan, the European countries, and Canada are all among the oldest countries in the world.  In Japan, 26.6 percent of the population already is over age 65.

It’s not hard to foresee the serious challenges posed by these long-term trends.  Without young people in the demographic pipeline to grow up, get jobs, and contribute their tax dollars, it’s hard to see how the social welfare model can be sustained.  The health care and retirement payment costs of a growing number of elderly ultimately will overwhelm the tax contributions of a shrinking number of workers.  And eventually, old people do die — which means that the “old” countries will soon become much less populated countries.  What will it mean to Japanese culture and the Japanese social model and, for that matter, Japanese influence on the world stage when that country’s population is but a fraction of its current size?

One other thing about demographic trends — they’re not readily reversed.  We’ve been moving toward “the crossing” for decades, and soon it will be here.  Get used to seeing a lot of gray hair in the world, folks.

With the wild stock market swings in recent days I thought it might be helpful to recommend a book I just finished today, The Great Depression Ahead by Harry Dent.

It is an excellent book which is simple to understand that everyone who is an investor should read with an open mind of course. Mr Dent is a long term stock market bull who predicted the technology boom and it’s demise and turned bearish a few years ago. He is predicting Dow 3500 – 3800 between now and 2014.

The premise of the book is that simple trends drive long – term growth and that changes in demographic and technology cycles are critical in predicting business and economic trends. He mentions that government intervention (QE2, stimulus etc) can sometimes delay, but won’t be able to overcome the massive baby boom generation productivity, earning and spending power that have now peaked.

It’s his opinion that a diversified portfolio which we are all taught to have will not be able to withstand the coming stock market crash and that only cash and high yield bonds will fair well in the near future. Mr Dent believes there will be bear market rallies until 2020 -2023 at which time a new “boom period” will emerge.

My next read is going to be Aftershock by David Wiedemer, Robert Wiedemer and Cindy Spitzer, all economists who are predicting a more radical market meltdown then what Mr Dent is predicting.