After years of increasing longevity, studies are showing that the death rate is rising, but only for one group — white Americans between the ages of 45 and 54.  The divergence in the trend lines may be inexplicable, but it is unmistakable.  While death rates are falling in other first-world countries, and for African-Americans and Hispanics in the United States, they are rising for middle-aged whites.

The circumstances of the deaths all point to mental health issues as an underlying cause for the anomaly.  As the Wall Street Journal reports, between 1999 and 2013 deaths from suicide, drug overdoses, alcohol abuse, and chronic liver disease all increased for that population demographic, even as the incidence of other common causes for mortality, such as lung cancer, declined.  The studies also show that the increase in the mental health-related causes of death is particularly notable among middle-aged whites with no more than a high school education, although increases also were observed among better-educated segments of the population, too.

The experts aren’t sure why the mortality trend is affecting this particular group.  Some point to increases in mental health issues among white Americans and musculoskeletal problems that have left people in chronic pain — and therefore ripe for self-medication through alcohol or addiction to powerful painkillers — but those don’t seem like reasons that should target one demographic group to the exclusion of others, or for that matter should affect Americans but not Germans, British, or Canadians.

Other experts say that “economic stress” is the culprit, and that many Americans have reached middle age only to find that they are less well off than their parents, when the “American Dream” we heard about growing up is supposed to result in increases in wealth and happiness from generation to generation.  That rationale might explain why Americans are being affected as opposed to those in other countries — but is belief in the “American Dream” really so profoundly different among different demographic groups that it would explain the different death rates?

In Walden, Henry D. Thoreau wrote:  “The mass of men lead lives of quiet desperation.”  Many of us know people who have succumbed to that desperation, but we aren’t sure precisely why.  We don’t know why they are prone to addiction, or depression, or suicidal thoughts when others in similar circumstances manage to deal with their problems and forge ahead — but these studies indicate that their stories are sufficiently commonplace to create a clear and disturbing statistical trend.

Our grandparents and parents would scoff at the idea that the “American Dream” was a bad thing.  Could it be that its aspirational notions have created expectations that, if unrealized, produce disappointment so crushing that it cannot be borne?  I’m skeptical of that conclusion, but I nevertheless wonder why so many people apparently are so desperately unhappy about their lives, and what we can do to change that trend. 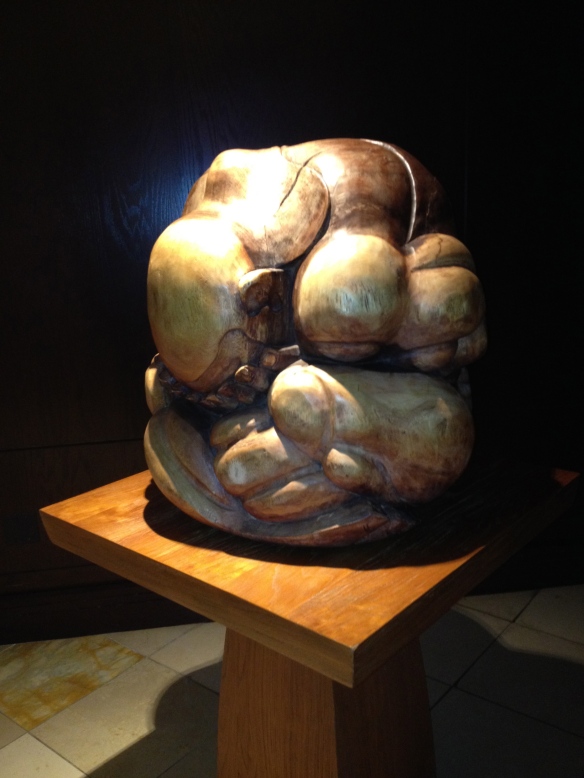 Tuesday night I had a bad commuting experience and got in to my hotel in D.C. late at night.  Exhausted and bedraggled, I slunk into the hotel lobby, checked in at the reception desk, and headed toward the elevator to get to my room and drop off my bags.

And there I saw . . . this.  A perfectly good sculpture, I suppose, in a normal setting.  In a museum, people might pause to examine it and remark upon its craftsmanship.  But the last thing a tired traveler needs to see on the way to a strange room in strange hotel in a strange city is a depiction of a distraught man folded in on himself, his head cupped in his hands — the very picture of despair and dejection.

Here’s a tip for hotel interior decorators — when you’re selecting art for the lobby, anything that conveys deep depression and loneliness probably isn’t a really good idea.

The world lost a good man this week.  He ultimately succumbed, as so many have before him, to the ravages of depression, and those who knew him, personally or professionally, are devastated.

Depression is such a terrible, pernicious condition.  It isn’t readily apparent when people are suffering from depression.  It isn’t visible, like a broken leg or a wasting disease.  Often people who are depressed try, successfully, to hide it from casual acquaintances — but the blackness and anguish and despair are always there, brooding and lingering under the surface, ready to pull them down again and again and again, until they just can’t tolerate it any longer.

Those of us who are fortunate, and who don’t suffer from chronic depression, can’t possibly understand what it truly means to be depressed.  It’s like a person who has known only perfect health trying to understand what it is like to live with constant, crippling pain.  You can’t comprehend the life-changing impact of permanent pain until you personally experience sustained physical torment whenever you draw a breath.  For the depressed person, the agony is just as real and just as unbearable.

Because depression doesn’t have physical manifestations, and because many people who suffer from depression are embarrassed by their condition, it’s difficult to measure just how widespread the problem of chronic depression really is.  Some estimate that as many as 1 in 6 Americans suffer from that affliction, with an economic cost of tens of billions of dollars.

But those are just numbers.  The real cost is in the losses suffered by families and friends who lose a loved one.  The real cost is the death of each person who was a good father and husband and friend, an active participant in his community and his workplace and his children’s lives, someone who made a real difference in other people’s lives.  When such special people lose their battle to this dreadful condition, the cost is incalculable.

Some people celebrate the extra hour of sleep we gain when we “fall back” every autumn.  Other people dread that day, because the simple act of turning back the clocks ushers in a season of seemingly constant darkness. 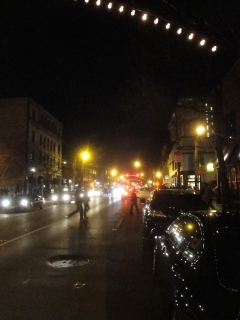 It’s dark when we get up in the morning, dark when we drive to work, and dark when we sit at our desks and turn to our work.  It’s dark when we we leave at night, dark as we drive home, and dark when we walk into our front doors.  When you couple the shroud of darkness with the unrelentingly overcast, wet, and cold weather that characterizes a Midwestern winter, you have concocted a powerfully grim brew that many people find difficult to handle.  There’s a reason why seasonal affective disorder has been defined by health care professionals.

I think there are two keys to successfully handling the darkness season.  First, maximize your exposure to daylight.  Get out of the building and into the open air for lunch and on weekend days, and if the skies are clear turn your face sunward.  Even the shriveled intensity of the winter sun is better than no sun at all.

Second, during the dark hours at home, always have a project to work on.  It might be reading a collection by a favorite author, or baking Christmas cookies, or updating your iPod.  One winter Kish and I decided to watch The Sopranos from beginning to end, and it was a very enjoyable exercise that helped to make the days go faster.  The projects will help to occupy the idle hours and leave you with a feeling of accomplishment — and perhaps even an appreciation for the darkness season and the opportunities it offers.